Iceland, Dubai, Greece, who is next?

It is known that the stock market pretends to react to every ripple on the economic and financial oceans. The real reason for these up and downs are profit taking manoeuvres. 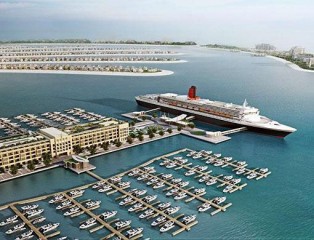 The Queen Elizabeth 2 in Dubai

With the stock market being fooled yesterday into thinking that the European Union was actually going to throw money at Greece in an effort to avoid a financial crisis for the Euro, it becomes clearer that the hens are coming home to roost.
Iceland, Greece, Spain, the US? I decided to return to the Middle East for a moment and check on Dubai, since their financial distress signs in December and the less than surprising “helping hand” from father Abu Dhabi (Abu translates to Dad in Arabic) and for a couple of weeks it looked like a Rose Garden all over. Yet again it shows that financial bail outs don’t do anything to change the underlying faults of a system. Pretty much like here in the States where the giant financial institutions once again fell they have to pay talent beyond the limit of their worthiness.
Well check this one out. Dubai World is considering the sale of Queen Elizabeth 2, the 40-year-old Cunard Line vessel it bought for a reported $100 million in 2007 when no-one knew what to do with Old Lady QE2.

According to a report in Arabian Business, Dubai World’s investment arm, Istithmar, said it was considering “a number of options” that would best “maximize the value” of the ocean liner. Great, a drop on a hot desert plate and the world, well the investors world, is holding their collective breath on what else of the Middle Eastern Disney World Dream is going to be up for sale at pennies to the dollar. Of course that dollar is getting weaker as well, so that is a double whammy. Well we know that Cirque du Soleil’s future in the Middle East hangs on a thread as well.

Istithmar had planned to convert the ship into a luxury hotel off of Palm Jumeirah, the world’s largest man-made island. Recently, the company indicated that it might sail the ship to South Africa to serve as a floating hotel during the World Cup soccer tournament. But that pipe dream fell pretty much in its butt, like another Ocean liner in Vancouver for the Winter Olympics, and now the QE2 has been moored in Dubai since late 2008, when the ship sailed its farewell cruise for Cunard.

Dubai World, the debt-ridden company owned by the Dubai government, was slammed by the economic downturn and a little bit of overspending and has already laid off 10% of its staff. Dubai World’s debt is estimated to be about $59 billion. Reports in the Arabic Business Press indicate that Dubai World could sell both the QE2 and Cirque du Soleil. The company has not acknowledged either rumor and could not be reached for comment. But then again who’s buying?
Last week there was another mini disaster, on which clarity is not given yet. Turned out that there is an electrical problem in the world’s largest building, the Burj Dubai.. Yeah yeah, I know they changed the name recently to honor the generosity of Father Dhabi, but I don’t think they are too happy over there, knowing that their $10 billion emergency bail out is not bringing the expected results.