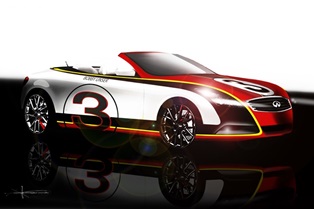 Infiniti’s impressive Pavilion Display will share space at The Golf Club of Amelia Island at Summer Beach as more than 300 vintage, classic and historic racing vehicles spread out across the golf course’s 10th and 18th fairways including special classes of show cars highlighting the 50th anniversary of McLaren Racing, the sports racing cars of Jochen Mass and special Offenhauser-powered race cars.

In conjunction with the recognition of Offenhauser-powered cars at this year’s show, Infiniti worked with the Indianapolis Motor Speedway Hall of Fame Museum to bring Bobby Unser’s 1968 Indy 500 race winning car to the concours. Infiniti also recruited its design team, headed by worldwide Design Director Alfonso Albaisa, to commission a one-off vehicle wrap for the Q60 Convertible special-guest Bobby Unser will be driving throughout the weekend that matches his winning race car. Reminiscent of the Rislone livery found on Unser’s Offenhauser-powered Eagle, the special wrap features a striking red, yellow, black and white design finished with the number three found on the winning car. When not in use, the specially designed Q60 will be displayed near the Infiniti Pavilion Display next to the 1968 Indy 500 winning race car.

In addition to this special Q60 Convertible, the Infiniti Pavilion will also showcase a selection of Infiniti vehicles including the 2014 Q70 luxury performance sedan, QX60 7-passenger luxury crossover, QX70 performance crossover, QX80 full-size luxury SUV and the new Q50 luxury sport sedan. Since going on sale last summer, the Q50 continues to be one of the leading options in the competitive premium sport sedan segment, incorporating class-leading, world-first technologies such as Direct Adaptive Steering and Active Lane Control.

“We’re incredibly excited to once again show our support for the Amelia Island Concours d’Elegance this year,” said Infiniti Vice President Michael Bartsch. “Yet again, with Bill Warner at the helm, the concours assembled a top selection of significant cars from all around the world. These cars are representative of the same passion and performance we try to incorporate into each of our passenger vehicles. The event continues to inspire fans new and old and we are proud to play a small part in it.”

About Infiniti
Infiniti Motor Company LTD. is headquartered in Hong Kong with sales operations in approximately 50 countries. The Infiniti brand was launched in 1989. Its range of premium automobiles is currently built in manufacturing facilities in Japan and the United States. Production in China and Europe will start soon along with the expansion of the brand’s portfolio.

As the Title Partner and Vehicle Performance Partner of Infiniti Red Bull Racing, Infiniti has a far-reaching technical collaboration with the Formula One team, and Sebastian Vettel, its four-time World Champion driver, serves as Infiniti’s Director of Performance.

More information about Infiniti, its Total Ownership Experience(r) and its industry leading technologies can be found at www.infinitiusa.com. For the latest news on Infiniti, visit www.infinitinews.com, “like” Infiniti on Facebook, and follow the brand on Twitter @InfinitiUSA.