Inspirations from a Las Vegas Breakfast

She had dinner with 1100 people at tables decorated for 85 countries, hugged a Swiss lifeguard, saw Eat etc. in Prime Steakhouse, met Simon Sinek, had meals in Africa, but this story inspired her most. 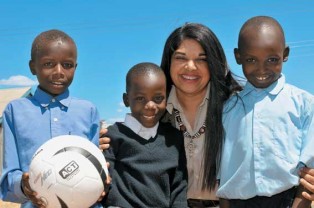 The world continues to prove itself a small place!  While attending Virtuoso’s annual Travel Mart in Las Vegas, I received an invitation, together with Lynann Mullis and Tracy Lynch, to attend a 6:30 AM breakfast at the Bellagio Hotel last Tuesday.  The breakfast was hosted by Micato Safaris, the family owned winner of Travel and Leisure’s coveted “Best Tour Operator” award for the last 8 years.  Each year this breakfast features inspiring stories from Kenya, beautiful gifts, and amazing entertainment such as Jack Hanna and his animals, the Kenyan Men Choir and this year the Kenyan Children Choir.  But this year there was an even more meaningful surprise for the audience.

A little background needs to be inserted here as Micato has a nonprofit arm in its organization called America Share (www.americashare.org). This organization matches sponsors with children in Kenya to provide these children with the opportunity to attend a boarding school and receive a good educational experience.

Guess our delight and surprise as on Tuesday morning a 15 year old young man, Justus, stood before us and told his story that had begun in small village, orphaned early on and living with his grandfather.  The youngster had a very special relationship with his grandfather who sacrificed a lot to make it possible for him to attend school at age 6.  At the time, Justus did not totally appreciate this special opportunity, he related to the spellbound audience of travel advisors.

He skipped school to play with friends and lagged in his studies.  His wonderful grandfather then sent him to live with his aunt in the capital of Niarobi.  This aunt had eight children of her own but scraped together the resources to send Justus to school.  He didn’t speak Swahili or English. He was laughed at and again lagged in his studies.  But, with the help of his cousins, Justus quickly learned the new languages he needed to succeed and actually began to excel in his classes.  He was eventually chosen by America Share and sent to the elite boarding school.  Now, at age fifteen, Justus has identified his calling to become a physician.  By the end of his very calm and well delivered talk there was hardly a dry eye in the audience.  But then came the final surprise for our Amelia Island contingency!  The inspiration for Justus’ decision to become a doctor was the famous Dr. Ben Carson!

That name will have special meaning to all of you who attended the Nassau County Boys and Girls Club Speakers Forum (http://bgcnassau.org/index.html) at the Ritz-Carlton Amelia Island the year before last.  Dr. Carson spoke and inspired all of us with his story of a challenging boyhood, struggles with school early on, the role that the Boys and Girls Club played, and his ultimate and amazing successes as a brilliant neurosurgeon.

Now before us stood a young Kenyan student who was himself inspired by this wonderful man. Justus went on to say that Micato was flying him to New York the next day to spend a week shadowing his new mentor.  We left the breakfast enriched and inspired by this encounter with Justus and his past and future!  We feel certain that one day we will read about this young man and the good deeds he will do in his community in Kenya and the world, much just as we do now about Dr. Ben Carson.  We felt so inspired that we at The Travel Agency are committing to sponsor a child through America Share and watch another future unfold!