Invasion of the Pirates 2011 Video

Fernandina Pirates invade the Shrimp Festival under the cover of darkness on Friday night then again, on Saturday afternoon. 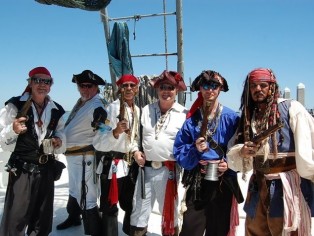 Each year the Fernandina Pirates Club volunteers invade the Isle of Eight Flags Shrimp Festival under the cover of darkness on Friday night then again, on Saturday afternoon. This non-profit, charitable organization are Festival favorites and the invasion this year transformed local shrimp boat, Island Girl, into a pirate ship. Armed with black powder pistols, rifles and cannons, this ship to shore battle concludes with a family friendly skit on the main stage at the waterfront in Fernandina.

Shrimp Festival may be the biggest event of the year, but it is not the only. These Pirates host bi-monthly blood drives, offer their own scholarship to Nassau County seniors entering both college and the military and they participate in a wide variety of other local charitable events including Joy to the Children.

They can be found this Friday at the Sounds on Centre, Sock Hop from 6:00 to 8:00 PM and on May 13th they will invade the Jacksonville Suns baseball game!

Keep an eye out – you never know where these fun-loving Pirates will show up next!

Here is video of the invasion: