Island Vibe to perform at July 5 Sounds on Centre

Island Vibe, to insiders known as 4 old guys and a blond chick, will perform their music of the ages during July 5th Sounds on Centre, starting at 6pm. 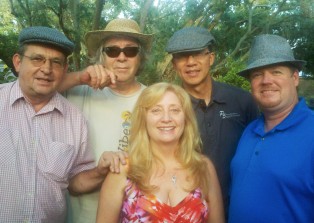 A new, local Amelia Island band will perform at Sounds on Centre, on Friday, July 5 from 6-8:00pm.
Island Vibe, on the SOC stage for the first time, is composed of five seasoned musicians, with three distinctive lead vocalists, while all provide vocals, generating occasional 5 part harmonies.

Their repertoire is as eclectic as our island’s residents and covers tunes from the past 10 decades, give or take. Previous performances for the Speakeasy Club at the Ritz Carlton and the Annual Grand Ball for the Pirates’ Club, included timeless classics by Ella Fitzgerald, Peggy Lee, Buddy Holly, Elvis Presley, The Beatles, Dolly Parton, Ray Charles, Bob Seger, Allman Brothers, Lynyrd Skynyrd, Crosby, Stills, Nash & Young, Billy Joel, Leeanne Womack, Jason Mraz and many more. The Centre Street performance will showcase some of the band’s magnificent harmonies.
During the July 5th performance Island Vibe will also debut an original song written by keyboardist/singer Ronnie Stoots, dedicated to our Amelia Island Paradise.

The members, all very involved in local community events, knew each other for several years. But it was Loren Lum, (previous producer of Sounds on Centre), who provided the spark in the fall of 2012. The days of, “We should get together one day and play some music…” were over, and a definitive date for a first rehearsal was set. Everyone listed some of their favorite songs, tastes matched and within months (and many more rehearsals …) a colorful bouquet of melodies saw the day.

The 5 members hail from very diverse hometowns, Denver, Dayton, Hawaii, the Netherlands and Belgium. Some members played the very same songs 30 years ago, thousands of miles apart, and not necessarily in the same language, proving that music is the universal language.
Band members are all local small business operators:

• Kim Crutchfield, guitar/singer, the better half of Marc Crutchfield – who is serving right now in Afghanistan – is a transportation broker, and a busy grandma.
• Han Ramakers, lead guitar/singer, is the publisher of SearchAmelia.com, operates the Amelia Oceanfront Bed & Breakfast on Fletcher with his wife TJ and is a founding member of the Amelia Island Blues Festival.
• Loren Lum, drums/percussion/singer, is co-owner with wife Bobbi of P5 Productions, he is also the Vice President for the Amelia Island Jazz Festival.
• Philippe Boets, bass, is the founder of Petanque America and organizer of the annual international PA Open tournament on the island.
• Ronnie Stoots, keyboard, singer and song writer, is a financial adviser and president of Amelia Wealth Management. It is alleged that he was able to play several instruments before he could even walk!