Japanese Cuisine and the Use of Chopsticks (oHashi)

As the world cuisines come to Amelia Island, we should learn a bit about their customs and food etiquette. It makes the dishes taste much better 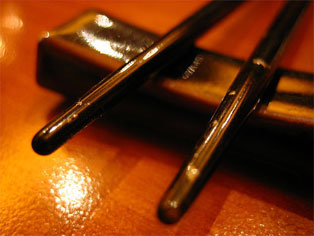 With the advent of Japanese Steakhouses and especially Sushi Restaurants (I love Fancy Sushi on Sadler Rd) on Amelia Island, some people may wonder about Japanese Table Manners and how to use chop sticks for starters. Don’t be nervous, even though it’s all in good fun, Japanese table manners, just as French Table etiquette are based on respect for the culture of their respective cuisines.
So, let’s go over some basic table manners in Japanese cuisine.

If you are eating with Japanese people, it’s important to say “itadaki-masu” before a meal and to say “gochisou-sama” after a meal. These phrases indicate the beginning and the ending of a meal and express appreciations for the meal as well. Kind of Bon Appetit but more graceful and grateful. Itadaki Masu literally means “I shall take” but implies to thank nature for providing the ingredients for the meal. “Gochisou-sama or “Gochisou-sama deshita” you say to the host, which means “Thank you, you spoiled me”.

To eat a bowl of rice or soup, lift the bowl with one hand. It’s proper to sip Japanese soup out of the bowl directly. Eat the ingredients with chopsticks, holding the bowl with one hand. To eat side dishes, you don’t need to lift plates or bowls. Cut large pieces of food into small pieces with your chopsticks and move to your mouth.
To eat from large serving plates, you may use the clean top ends of your chopsticks to pick food to your own bowl or plate, if serving chopsticks are not available.
To eat sashimi (raw fish slices, mostly salmon and tuna), mix wasabi (Japanese horseradish) into soy sauce in a small plate and dip sashimi pieces in the sauce. If you like and can handle the hotness of wasabi, put it directly on sashimi slices and dip in soy sauce to eat.
To eat tempura, dip it in tempura dipping sauce. Wow I’m getting hungry.
To eat sushi, clean your hands first. Pick up nigiri-zushi (hand-pressed sushi) between your thumb and the index finger and the middle finger. Dip the end of the topping (not sushi rice side) in soysauce and bring the sushi to your mouth. It’s good to eat the whole piece all at once if you can. If not it may fall apart!

Tips:
1. It is OK to make some slurping noises while eating noodles in Japan.
2. Try not to eat soup all at once. It’s polite to eat rice, soup, and other dishes alternatively.
3. Don’t dip a whole sushi piece in soy sauce. The rice part tends to fall apart.

Using Chopsticks
The Japanese word for chopsticks; hashi, means “bridge”. Unlike Chinese chopsticks, which are squared-off and blunt at the end, these Japanese utensils are rounded and tapered to a point at the end (and much more difficult to use). It has been suggested that this is in order to facilitate the removal of bones from fish, which makes up a great part of the Japanese diet. Note that most japanese restaurants serve the Chinese style chopsticks to patrons.
Would you eat a sandwich with a spoon? Or use a fork to eat ice cream? Certain foods require the appropriate utensil. Asian foods are no exception: they seem to taste better eaten with chopsticks. And although some of us were raised using chopsticks, it can be an awkward experience for many others. Fortunately, learning to eat with chopsticks is actually quite simple.
Many of us labor under a misperception about chopsticks–that both sticks are moved together in your hand as you pick up a morsel. This is only half-true. Instead you’ll be holding one chopsticks in place while pivoting the other one to meet it. Simple, eh?

Heaven forbid that the restaurant serves disposable chopsticks in this era of disappearing ancient forests. But to prepare you for that possibility, here’s some advice on breaking them apart. Pull the sticks away from you on a horizontal plane, so your palms end up facing away from you. Twisting them apart vertically can cause splintering, which might hamper your dining experience..

Of course, most restaurants will serve you disposable chopsticks. Especially in Japan. Many things are individually wrapped. The culture is very conscious of personal hygiene/sanitation.

Step 1 – Position the chopsticks
Place the first chopstick so that thicker part rests at the base of your thumb and the thinner part rests on the lower side of your middle fingertip. Bring your thumb forward so that it traps the stick firmly in place. At least two or three inches of chopstick should extend beyond your fingertip.
Now position the other chopstick so that it is held against the side of your index finger by the end of your thumb. (As if you were holding a pencil). Press the ends of both sticks on the plate, while holding them at a slight angle to the table. Allow them to slide just a little so that the ends line up.

Step 2 – Pivot the top chopstick
Place a little pressure on the top chopstick. It will pivot on your index finger and thumb. Remember: the bottom chopstick is stationary. Your thumb will stay fairly stationary, while the index and middle fingers are used to move the top chopstick.
The tip of the top chopstick will move towards the tip of the bottom chopstick. Encourage this. Hold those tips together firmly enough to grasp a piece of food and lift it off the plate. Place delicately into your waiting mouth. Although there’s no need to stoop, you may wish to lean over your plate a bit during your first attempts. It might save you from a clean-up.
That’s about it. Have a little practice, use mini-marshmallows or some other small food items, and you’ll be able to use chopsticks with the best of ’em.

Here are some Bad Manners while Using chopsticks.
Mayoi-bashi : Mayoi means “dithering”. It is bad to wave your chopsticks around aimlessly over the food, trying to decide what to take next.
Utsuri-bashi : Changing the food you have selected after you have touched the food.
Saguri-bashi : Looking for contents in a soup with chopsticks.
Sashi-bashi : Sashi means “inserting”. It is bad manners to spear food with the points of the chopsticks as if they were a fork. Pointed utensils such as forks are a no-no in most Asian cultures anyway.
Yose-bashi : Yose means “drawing near”. Don’t pull the dishes towards you using the chopsticks. Always pick the dishes up in the hand.
Yoko-bashi : Keeping chopsticks together and using them like a spoon.
Komi-bashi : Raking foods into one’s already full mouth with chopsticks.
Neburi-bashi : Licking the ends of chopsticks.

Other tips
Don’t eat with a broken or mismatched pair of chopsticks.
Don’t pick twice in a row from the same dish except your rice bowl.
Don’t stick chopsticks in your rice. This is commonly done at funerals, or as an offering which is placed on the alter at an ancestral shrine.
Don’t dig under food to get the best pieces.
Don’t eat food directly from the central plate, transfer it to your bowl first.
Don’t stab your food with a chopstick.
Don’t set chopsticks on your bowl of dishes. Chopsticks should be placed on the table, chopstick holder or tray. When you are not using the chopsticks, put them in front of you onto the table or a dish with the tip to the left.
Do not give food from your chopsticks directly to someone elese’s chopsticks. Only at Buddhist funerals are the bones of the burned body given in that way from person to person. Don’t make noise with your chopsticks.
Don’t reach across another person with your chopsticks.
Knife and fork are used for Western food only. Spoons are used for eating certain Japanese dishes, for example donburi or Japanese style curry rice. A Chinese style ceramic spoon is sometimes used to eat soups.

Handling dishes
– Japanese dishes are designed to be the right size and shape for holding in the hand. It is a particularly important point of etiquette to lift the dishes to the breast when eating rice or drinking soup.

– When eating tempura, sashimi(raw fish), or other food which is dipped in sauce before being eaten, use the hand not holding the chopsticks to hold the dish containing the sauce.

– The dishes or plates used for grilled fish are usually too large to pick up. Such platters may be left on the table. When eating from a large platter or pot, transfer a portion from the communal pot to your own small dish and then lift this dish to eat.

Table Manners
– Use your chopsticks to cut up pieces of food too large to fit into the mouth in one bite.

– When eating food served in a bowl with a lid, replace the lid on the bowl when you have finished.

– When you have finished your meal, replace your chopsticks on the chopstick rest (when provided/present) as they were when you started. (I usually fold the chopstick wrapper into a small rest)