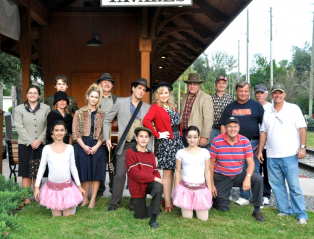 The Cast for the Music Video "The Gospel Train"

The Island’s first Couple of Cinematography, Nadine Vaughan and Rick Traum were at it again when local contemporary gospel duo Joey Daddario and Jeanie Scheff decided to produce a real professional music video for their latest album’s title track “I Grew Up On Gospel” and retained the award winning talents of Executive Director Dave D’Ardenne, who in turn approached Nadine Vaughan to head up the production team as Producer, Writer, Casting Director and Costumes and Don Flynn as Director Photography.

Nadine’s script “The Gospel Train” called for a 1950s period setting in an active train station setting with a real life locomotive, which is why Fernandina Beach would not qualify for location selection and therefor the crew and cast of some 25 in total took a three hour bus ride south to Tavares Florida where the perfect setting was available.

That’s what professional production is all about; not sacrificing authenticity and creativity if it can be avoided. It happens too often in modern day filmography that scripts are adapted for budget reasons, and loose a lot of the communicative impact in the process. But from what I could see on the pictures taken by set photographer Ann Fontaine, authenticity was entirely intact and she did a marvelous job eternalizing the entire production in more than 300 photographs. Just looking at the pictures already gave me that feelgood aura, that I get every time I hear Joey and Jeanie perform. Their music is just life affirming and looking at the photographs I can see why production consultant Rick Traum emailed that cast and crew had a marvelous fun time.

Director David D’Ardenne retired from a 30 year New York ABC network career as Sound Recordist and miniDV camera operator to Northeast Florida in 2005, where he started Sight and Sound Production Services. And guess what…? Just like Rick Traum has a rich and award winning production experience in TV programming, David D’Ardenne’s portfolio is also stacked with excellence that crosses all networks and cable channels and includes productions for celebrity such as Michael Jackson, Oprah Winfrey, Barbara Walters and many more.

Director of Photography Don Flynn started his video and film production company in NE Florida in 1993  and has since become a cornerstone for quality productions in the area and bringing this group of accomplished professionals together in support of Joey and Jeanie’s growing popularity, will not only score attention for the artists, but also for the area being fully capable to support professional film production, set inside great locale and with plenty of talent and equipment available.

At Searchamelia we have supported Joey and Jeanie’s talent and creativity from early on as you can read here and here and we truly believe that with the right combination of quality marketing and product distribution, they will score high nationwide and beyond.
You can purchase their new album with 16 songs straight from CDBaby.com 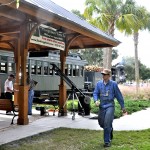 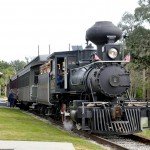 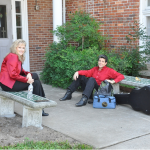