Just an Oasis in the Financial Desert? 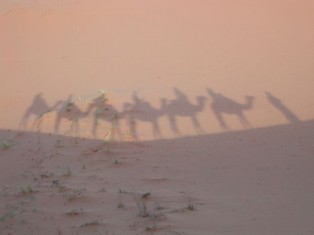 Real or Mirage, Camels in the Desert

Like wanderers in the desert, investors and broad financial markets breathed a sigh of relief when an apparent oasis appeared last week. After Federal Reserve Chairman Ben Bernanke’s speech in Jackson Hole WY, the Dow Jones Industrial Index posted its first weekly gain in more than a month, finishing at 11,284, an increase of more than 4 percent for the week and has been climbing ever since, while I’m looking at 11,698 midday on Wednesday. The Standard & Poor’s Index and Dow Jones Global ex US Indices also were up for the week. In addition, the Chicago Board of Exchange Volatility Index (VIX), which is known as the ‘fear index’ because it reflects the amount of volatility investors anticipate in the next 30 days, fell by more than 10 percent. According to The Wall Street Journal, the head of U.S. equities index trading at Barclays Capital said that after Mr. Bernanke’s speech, some investors set up options positions that are designed to profit from improving stock market stability in the future.

Essentially, the Fed Chairman said in his speech that it is time for fiscal policy, not monetary stimulus, to take the reins and demonstrate some economic leadership for a change. If we are being intellectually honest, there is little more the Fed can, or should, do at this point. With interest rates already at zero, there are no other tricks up the magician’s sleeve. A commitment to maintain present course is all Bernanke has to offer.  Raising interest rates would definitely be the wrong thing to do, with so many other economic indicators still struggling. Perhaps it is this commitment to doing nothing – to staying out of the way – which the market seems to applaud.

While a week with positive market performance was welcome, the question remains: Has stability returned or is this just a very complex shimmering illusion or fata morgana (mirage) as they call it in the desert? Only time will tell.