Killer Bees on the High Seas 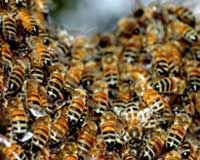 I recently came across an article that told of a story about swarms of bees traveling ‚Äúoffshore‚Äù near Florida‚Äôs east coast. The offshore part is what initially gained my attention. This is normally the one place in Florida, where year round, there are no insects flying or otherwise. However, swarms of bees have been seen congregating around the down town marina and old shrimp docks at least once a summer by an unsuspecting dock worker or fisherman. The Coast Guard report on this particular case was of several Florida fishermen in the Cape Canaveral area. They were approximately four or five miles offshore, anchored and targeting bottom fish. The day was clear with light winds in early summer. The boat was a 37‚Äô sport fisherman complete with a fly bridge and cabin. After several hours of successful fishing the crew noticed several bees landing on the boat and from first appearances the bees seemed aggravated. This went on for several minutes with a few more showing up and landing all around the boat, them too looking agitated. One crew member on the fly bridge noticed a dark ‚Äúswarm‚Äù heading at a high rate of speed towards their boat. A brief attempt was made to swat off the bees. The crew thought to cut the anchor line and motor away, but with literally thousands of angry bees stinging the crew, it was decided they were no match for the bees and retreated into the cabin. A call was made to the Coast Guard station and the situation explained. Initially the call was thought to be nothing more than perhaps a nest of bees on the boat that was disturbed making the occupants on the boat uncomfortable. However, the Coast Guard did what they do best and sent a 40‚Äô cutter equipped with a high pressure hose and deck gun used to fight boat and marina fires. The Coast Guard arrived and found the sport fishermen completely inundated with bees. The fire hose was used along with the deck gun to scatter the bees away from the boat with slow success. The bees would actually return after being hit with pressurized water. ‚ÄúIt was as if they were protecting the boat as their nest,‚Äù one member reported. After nearly an hour of battling the swarm and several Coast Guardsmen being repeatedly stung, the area was deemed safe enough for the captain to pull the anchor, start the engines and move away from the bees.

Ultimately, the Coast Guard findings reported that the bees were drawn to the boat because of harmonics associated with the generator running. This ‚Äúhumming‚Äù made by this motor mimicked the sub terrain sounds of a working bees nest deep in the ground and causing the bees to act as sentries and protecting their nest. So what should one do if confronted with this same situation with no place to retreat to? I have been told by several persons who have raised and worked with bees to turn off or get away from what ever machinery is making the noise that attracted the bees in the first place. If it were me and we were on my boat we would ‚ÄúGetty up‚Äù, throttle up and leave those bees in our wake.