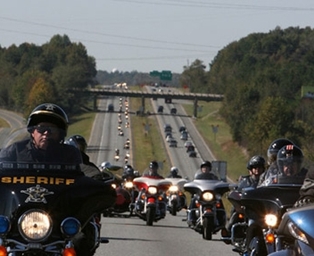 CHARLOTTE, N.C. – The Kyle Petty Charity Ride Across America announced the route today for its 17th anniversary motorcycle event, which takes place May 7-14.

What started more than a decade ago as four friends wanting to travel from one race track to another has grown into a highly organized motorcycle ride that raises funds for Victory Junction and other children’s charities. This year Kyle Petty, former NASCAR Sprint Cup driver and Charity Ride founder, will lead a field of more than 175 riders from Lake Placid, N.Y., to Amelia Island, Fla., as they raise awareness and funds for several causes, including Victory Junction, a camp for chronically ill children founded by Kyle and Pattie Petty in honor of their late son Adam.

“The idea for the Charity Ride started back in 1993 with Robin Pemberton (Vice President of Competition, NASCAR), Eddie Gossage (President and General Manager, Texas Motor Speedway) and Michael Dranes (FOX network cameraman) and me just kind of riding from track to track. We called it the “Hey Buddy Tour,” said Petty who currently serves as a racing analyst for TNT and Speed. “What began as a few friends having a good time riding has turned into what we have today. Once we got started, we decided we needed to give back to the towns we rode through, so we started donating to children’s hospitals along the way. The past few years though, it’s really enabled us to make a difference at Victory Junction. We’ve built a water park and sent hundreds of kids to camp all because a bunch of people like to ride. It’s pretty amazing to me.”

Victory Junction, which operates solely on donations, is a year-round camp serving children, ages 6 to 16, whose health issues would typically prevent them from attending camp. The Pettys founded the camp in 2004 and fundraising for a second Victory Junction in Kansas City, Kan., is currently underway.

About Victory Junction
Victory Junction is a year-round camping environment for children ages six to 16 with chronic medical conditions or serious illnesses. Founded by Kyle and Pattie Petty in honor of their son Adam, the camp is located in Randleman, NC, with a second location opening soon in Kansas City, KS. Victory Junction offers programs for a range of disease groups and maintains strong relationships with more than 30 partner hospitals. Victory Junction’s mission is to provide life-changing camping experiences that are exciting, fun and empowering, in a safe and medically-sound environment. As a not-for-profit organization, the camp operates solely through the support of generous individuals, groups and corporations to provide this experience at no charge to children and their families. For more information or to donate, visit www.victoryjunction.org.