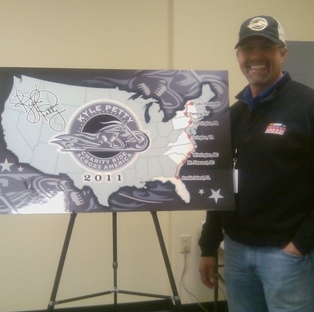 CHARLOTTE, N.C. – Fans and supporters of the Kyle Petty Charity Ride Across America will have a new way of making an impact this year. Now the public can make a $10 donation by texting RIDE to 27722 from their mobile phones. Funds raised will support the children’s charities the Ride benefits, including Victory Junction, a camp for chronically ill children founded by Kyle and Pattie Petty in honor of their late son Adam.

Victory Junction, which operates solely on donations, is a year-round camp serving children, ages 6 to 16, whose health issues would typically prevent them from attending camp. Since the Charity Ride’s inception in 1995, more than $14 million has been donated to Victory Junction and other children’s charities. The 2010 Charity Ride raised enough money to send 180 children to Victory Junction for a five-day session free of charge.

“We’re really excited about the new texting program and hope it’s a way to make people feel involved,” said Petty, former NASCAR Sprint Cup driver and Charity Ride founder. “People ask us all the time how they can help, and this is an easy way to do it. Whether or not the Ride is going to be near their hometown this year, it’s an opportunity for fans around the nation to feel connected and know they’re really doing something to make a difference.”

What started more than a decade ago as four friends wanting to travel from one race track to another has grown into a highly organized motorcycle ride. Petty will lead a field of more than 175 riders on this year’s 17th-Annivesary Ride from Lake Placid, N.Y., to Amelia Island, FL.

To make a donation, text RIDE to 27722. Reply to the confirmation text with the word YES to confirm the donation. Charges will appear on user’s wireless bill, or be deducted from their prepaid balance. All purchases must be authorized by account holder. Message and Data Rates May Apply. Reply STOP to 27722 to STOP. Reply HELP to 27722 for HELP. Full Terms: www.mGive.org/T.