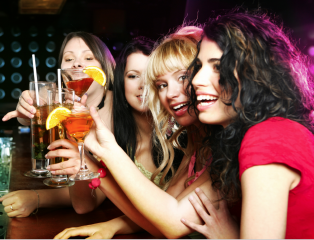 5 Drinks in a 120 lbs body weight is intoxication!

In the closing paragraph of today’s blog Dave Scott announces that The  Palace Saloon has brought back its popular Ladies’ Night from 9 pm- 2 am on Thursday’s, where ladies can get a bargain five drinks for five bucks including call drinks, call shots, domestic draughts and house wines, a price that almost makes it worth going in drag, or if that doesn’t appeal to you guys, then you can buy your drinks for just $2.

Reading this I could not escape the thought that many patrons would leave the bar those evenings impaired, if not drunk, and if the National Trend to finance law enforcement out of arrests, property confiscations and traffic violations continues, this could be a feasible way out of budgetary problems fort the city. A quick search on the internet revealed the following chart borrowed from DUI.Drivinglaws.org. It shows a clearly that right at 5 drinks legal intoxication makes its entry, even taking factors such as weight and gender into consideration.

While the Beta side of my brain was doing a series of quick calculations, the Alpha side was conducting a role play interview with local police chief Jim Hurley about consequences for police deployment and budgetary opportunities.
I won’t bore you with the details of this imaginary discussion but the bottom line was that here was a real opportunity to fill the local administration’s coffers with enough dough to meet many financial targets, including underfunded pension liabilities for 2015 and beyond. 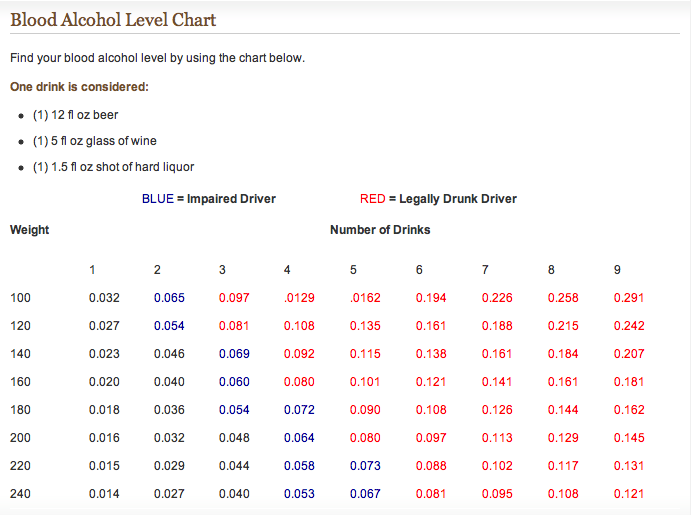 A series of calculations showed that
• a 120 pound woman doing five shots inside of an hour (pretty much party mode behavior) hits more (0.17%) than twice the legal limit (0.08%) for operating a motor vehicle. By the way it doesn’t make a difference whether you mix up your drinks (beer, wine or hard liquor) or stay in one poison. The result will be approximately the same: you are drunk!
Now if you’re a woman of weight, say 240 lbs, the same conditions of 5 drinks consumed in one hour will bring you awfully close to that 0.08% mark. You’ll be impaired but not legally drunk yet.
• If you are a “social drinker” and use this ladies’ night promotion to have a drink every hour between 9pm and 2am in the morning and you weigh in at 120lbs, you’d still be legally intoxicated at closing time (0.10%). But if you’re 240lbs, your alcohol level would hardly show at 0.008% –
Guys on average have a 30% more resistance than women of the same weight group.

So: assuming that the Five Dollar-Five Drink Ladies Night Special is a packaged deal and you consume all five drinks, every woman under 220lbs body weight will walk out of Florida’s Oldest Saloon legally intoxicated on a Thursday night or early Friday morning.

Here are a few of the highlights of my imaginary conversation with chief Hurley:

• City police will be out in full force and all patrol cars will be commanded onto the streets between 10pm Thursday night and 3am Friday morning;
• The Sheriff’s office, in an effort to get its share of tickets, arrests, confiscations and impounds, will increasingly compete with city law enforcement for the most traffic stops conducted, and ultimately demand consolidation of effort considering that popular opinion gets louder that both law enforcement agencies should merge to gain economy of scale; 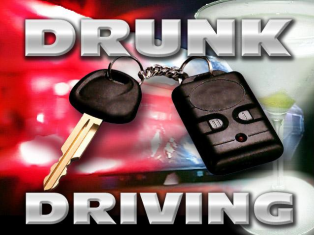 • Considering how severe Florida’s Drunk Driving Penalties are, just 20 DUI tickets a week would bring in an easy $1 million into the law enforcement coffers. And this is only for first time convictions. Second or third conviction revenue would start rivaling Wall Street’s margins.

And talking about Wall Street, there is a parallel visible but obviously on a different scale.
Wall Street participants, (brokers, hedge fund managers,  have been making so much money off the Fed’s stimulus funding in recent years, that not only did they get renewed Government approval to selling the dangerous risk derivatives once again (remember the ones that almost took us out in 2008??), but these same guys are also driving up real estate prices in New York city to incomprehensible levels. Under the motto to keep the money rolling, financial bigwigs are now transferring some of their enormous recently acquired wealth to bigwig real estate developers who are building them safe and over the top condo castles, priced between $17 and $64 million a pop. Generations of true New Yorkers cannot afford the city anymore and are being forced out.
Not sure why I’m bringing this up in this article, but my brain has a strange way of connecting the dots. Be careful Fernandina.

And as a closing argument: The Bar Promotion, Ladies’ Night was introduced as a marketing tool for bars and lounges to get lots of ladies into an establishment on certain slow nights, because the belief is that they will attract large numbers of heavy drinking males to come and spend large amounts of hard earned cash on ladies’ drinks and their own.
Looking at the above numbers and considerations,  I think this promotion may quickly turn into a “self liquidator” as in the end only 200lbs plus females with a measure of self control, will be able to crawl up to the bar, without the constant fear of getting caught driving drunk. And even though 200lbs plus ladies deserve the best in life, they do not constitute the demographic profile the promoters of Ladies Night originally had in mind. Just sayin’.

In the meantime I think I’ll apply for a combined taxi/towing license and purchase some towing trucks with luxury passenger quarters to deliver intoxicants and their vehicles home in one clean sweep. Could be a good business opportunity for a while.