In a last minute surprise that has Blues written all over it, Eddie Taylor Jr. will stand in for Willie Big Eyes Smith at Amelia Island Blues Fest 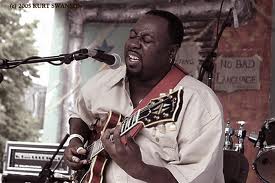 Sometimes it’s just the luck of the draw and when the draw is seemingly against you, you sing the blues, pick up the pieces and make the best of it. In March we lost our Friday Night headliner for the Blues Festival when Pinetop Perkins, the 97 year Mississippi Delta Blues phenomenon who just a month earlier had accepted an Emmy Award passed away. In the time that followed we renegotiated with his life long side-kick Willie “Big Eyes” Smith’s management and agreed on the 75 year old Smith, a famous singer, harp player and original drummer for Muddy Waters to do a Pinetop tribute with the original band.

Not until late last night did we learn that Willie “Big Eyes” has been struggling with his health and unfortunately cannot make it to our Amelia IslandBlues festival and instead is sending his stand-in Eddie Taylor Jr. backed by most of the Muddy Waters Band. Of course at this late stage of the preparations, panic is not a good thing, so we decided to accept the core mission of the blues and to let the show go on and wish Willie “Big Eyes” Smith a quick recovery, and focus on Eddie Taylor Jr.

And that of course is where the internet and youTube become a wonderful source of current day information. Eddy Taylor Jr. is one of the musical offspring of postwar blues genius Eddy Taylor Sr., all of whose children are musicians of exceptional talent.

Eddie Taylor Sr., a Blues Hall of Famer (1987) was a founder of postwar Chicago blues and the genius behind the famous Jimmy Reed. His wife Vera Taylor, Eddie Taylor Jr’s mom was a legendary blues belter in the Chicago Blues Community.  When Eddie Sr. passed away in 1985, his red guitar, a Gibson 355 stereo, was left sitting in a corner of the house for quite a while.
Eddie Jr., the third son in the family, had grown up hearing blues, but his main interest at the time was the then prevalent hip-hop music. One day he started listening to his father’s records, picked up the guitar, hooked it up to the old Fender tube amp, and started teaching himself to play and sing.
Today, at 40 years old, Eddie Taylor Jr. is a leader in traditional Chicago blues.
“Most people who play the blues today don’t have the old original feel. I respect all the musicians, but there are certain musicians who give me that true feeling that I really want”, he says.

Eddie’s sophisticated playing allows him to bring back some old favorites and add his own new tunes. that are a bit too tricky for the average blues bar band to copy. Fans are sure to tap their toes when he belts out “Cut You Loose,” a Ricky Allen tune which was a favorite of his late mother Vera.

“I can sit in with a lot of different kinds of music,” says Eddie, “but when it’s my turn to stand up, I play what I play. I don’t know whether the person in front of me in the audience knows anything about Eddie Taylor Sr. or Jimmy Reed, or if they are a jazz fan or a classical fan looking to hear something different. But the music I play, I play like me. That’s the way I do it.”

A Taylor family band is one of Eddie’s dreams: “We’re proud of our heritage. We want to let the world know what we’re about. That’s all we’re trying to do-get a fair chance out of life, like everybody else.” Eddie Taylor Jr. fronts Willie’s Band as he has done on numerous occasions and Live you can really hear him stretch out on guitar. He has played with all the traditional blues greats and can often be found in Europe’s Blues Meccas playing to excited audiences.