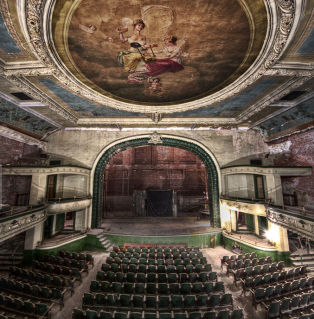 Suppose they give an election and no one shows

As I’m watching yet another set of idiotic political messages on TV, dealing with Charlie Crist’s attacks on Rick Scott’s company illegally feeding from the public trough while Scott’s campaign centers around flipping Crist being responsible for 800,000 job losses during his tenure as Florida’s Governor, I wonder why people love to be lied at, better yet apparently demand it from their leaders.

We already knew about Scott’s shady past before he was elected last time and to make Charlie Crist – not the cleanest one himself either- responsible for 800,000 job losses in Florida, when the world dove into an economic tailspin after the 2008 crash on Wall Street, is ludicrous to anyone with a basic sense of economics. Yet, millions are being spent on these messages trying to sway the voters left or right.
And then my thoughts go to the local political arena and my recent encounter with one commissioner in the local halls of social exchange, the grocery aisles at Publix Supermarket and for a brief moment I actually felt sorry for a certain class of politicians in today’s world; those that chose this path in life out of the urge to create a better society.

The commissioner in question “applied” for his job several years ago with the very best of intentions, wanting to make life in this wannabe Mayberry-town better. But as we talked, I could see that he was worn out and slightly bewildered by the facts that his constituents not really want him to fix things.
I might normally have interpreted that as some kind of excuse, but he seemed especially open at that moment, so I asked him what he thought. He sighed and told me that he really wanted to put some progress and future into this town but when he thought he had an opportunity to actually deliver on most of the things he had campaigned for (reduced government, less meddling in people’s lives, plans for a solid economic future, stuff like that) he quickly learned that whenever the issue became a “tit for that” situation, requiring a small price to pay, nobody stood with him.

“And?” I asked.
He looked at me in a worn out way and said, “No one would pay even a small price or take some minimal action to get what they said they wanted.”
I could only nod as other people we both knew pushed by with their shopping carts. I felt a bit sorry for him and thought there is so much wisdom in song lyrics, softly singing inside my head Jonny Lang’s first hit:
‘Lie to me, Lie to me and tell me everything is all right
Lie to me and tell me that you’ll stay here tonight
Tell me that you’ll never leave
Oh, and I’ll just try to make believe
Come on and lie to me’.

That brought me to another subject, but I was hesitant to bring it up. Politician or not, this man was feeling a lot of sadness and I didn’t want to pile on. But he always was a stand-up guy, and he got there himself, so I said: “You know what that means, don’t you?”
“Yeah, I do. It means that no matter what they say, they don’t really want change… they’re not willing to ‘suffer’ for it. All their slogans are just brave-sounding words. They need politicians, so that there’s always someone to blame.”

I agreed, even though it’s not often that I feel sorry for a politician, but on this occasion I had to. This man had started with good intentions. And regardless of how badly his electorate had let him down, what really pierced his heart was learning that his voters didn’t really want what they said they wanted. That made everything he was doing meaningless. It’s tough to watch that kind of realization spreading over the face of a guy passing the prime of his life.

The truth of the matter is that the productive people of the world — those of us who create and supply products and services — have the ultimate say over what happens on this planet. If any serious number of us decided that we really didn’t like what politicians were doing, we could simply withdraw our support and the political systems would crash, rather quickly I would guess. But for what it’s worth, we live in a state of special interests and that’s why this mid-term election is the most expensive one in history: $4 billion dollars of empty promises and slogans!

Tuesday is another election day that no-one is really interested in even though slightly more than $4 billion dollars is spent on this mid-term, which probably get less than half of the registered voters enough energized to make it to the polling stations. And do we really think Crist or Scott are fundamentally different people. In spite of all the slogans and accusations, they are not.

And on the Federal level, to make sure that life stays in the balance of a happy status quo, Washington and the Feds predictably put out some upbeat statements about the economy and GDP last week, so we all( except for realistic economists) can sleep in financial peace, because our wise politicians and their appointees have saved the global economy and everything is fine now. Wall Street goes through the roof on credit and debt, gold is down and the banks still don’t loan, unless you bring a truck load of cash and your first-born with you. In the meantime health insurance premiums go up 10%, Florida Power is granted another 5% billing increase and we’re all scrambling to make ends meet. The price of oil is now down to a price level ($80 a barrel) at which our newly found shale oil operations cannot make profit anymore, so expect a reversal of that Christmas gift to be coming soon.
“Lie to me and tell me everything is all right.”
Yes, I pity the poor politician who seeks office, especially in a small town, to try and improve things, to come and find, that his reason for existence is anchored in a lie. People don’t want to change, they just want someone to blame. Keep that in mind when you’re voting today.

The vast majority of politicians lie, steal, and cause lots of harm, but they persist because people want them to persist.