America's retailers are getting ready for the Holidays with major discounts announced for Black Friday. Facebook rather than traditional media bring the story. 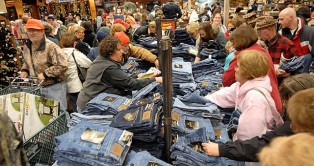 On November 18, a list of Macy’s Black Friday deals was released via Facebook. Some of the deals include a $99.99 Literati e-reader from Sharper Image, watches from $29.99 to $39.99 from AK Anne Klein and Tommy Hilfiger and a $19.99 2.75-quart casserole pot from the Martha Stewart Collection.
But what’s even more telling about the state of the retail nation is that in line with most retailers across the nation Macy’s stores nationwide will now also open at 4 a.m. on Black Friday — the day after Thanksgiving when shoppers clamor for discounts. Rival J.C. Penney also will open stores at 4 a.m. on Black Friday.

Last week, Sears announced it will open for the first time in its 124 year history on Thanksgiving Day from 7 a.m. to noon and Wal-Mart started offering free shipping with no minimum purchase requirement on 60,000 holiday items bought on its Web site through Dec. 20.  It looks like retailers want to give credibility to the phrase “Black Friday” as it refers to retailers turning a profit or being “in the black.”
Industry insiders claim that this year is set to break all records. Even though I think that is primarily a tragic form of wishful thinking, I do agree that it would be a nice change from recent years and let’s face it, the Dow’s 173 point gain today proves that a lot of people are getting in the Holiday Spirit.

On the service end of the retail fence, upscale retailers are getting down in the mud with discounters such as TJ Maxx and Marshalls as shoppers with upscale tastes but shallow pockets are finding more shopping choices with a recent resurgence in outlet and off-price stores being rolled out by Neiman Marcus and Macy’s Bloomingdale’s chain.

Neiman Marcus is introducing a new concept it calls Last Call Studio. The off-price boutique offers this season’s designer goods at up to a 65 percent discount. It is able to offer the prices by buying overstock directly from manufacturers. It also recently launched LastCall.com, an off-price website and explains that the studio store concept is different from its outlet stores,  which also offer goods at bargain prices but are much larger and sell older merchandise.

Other retailers are also jumping on the outlet and discount trend.
Ann Taylor Stores announced last month that it will expand its factory outlet footprint in 2011 with plans to open 35 LOFT Outlet Stores and five Ann Taylor Factory Stores.
Some analysts said that retailers are being driven by budget-conscious consumers that aren’t spending big money on discretionary items like apparel and jewelry. High unemployment has left many people cautious about spending even as economists have declared an end to the recession.

Even though some agree that the recession is not over for the consumer, the reason behind this trend is overproduction and down-scaling. As we are in a huge de-leverage process, some retailers claim that merchandise at the off-price stores is of equal quality to the full-price stores as they are able to buy leftover merchandise from designers who have canceled orders or have clothing made from extra fabric. Essentially they are selling down inventories in the current fashion retail cycle.  Analysts however claim this to be temporary as the quality of the clothes at outlet centers often times isn’t as good, even though manufactured at the same standards as the merchandise in the full price stores.

In any case, this Holiday season, the consumer will have a better chance than ever in recent history to buy quality at bargain prices, never mind the waking up in the middle of the night to catch a 4am store opening madness.