Just when we thought the Main Beach dumpster issue had been resolved in Fernandina, we discover we were wrong. 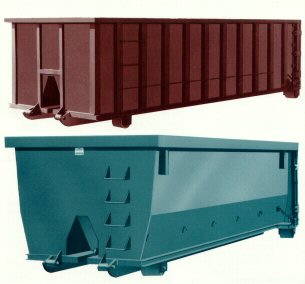 As Dave Barry says, I am not making this up. Just when we thought the Main Beach dumpster issue had been resolved, we discover we were wrong. After months of conversation, negotiation and threats of lawsuits, we are back at square one. Why? On a 3-2 vote at the March 20, 2012 regular meeting of the Fernandina Beach City Commission (FBCC) the FBCC refused to spend an additional $2,500. If you think your elected representatives might have better things to do with their time and your money, read on…

A few years ago, the proprietor of Sandy Bottoms agreed to let the city place a garbage dumpster temporarily outside his establishment while a permanent site was prepared. Unfortunately, the alternative site was not acceptable to the condo residents who would have been treated to the site and smells of garbage from their balconies. The condo residents complained to the city; but not to be deterred, the city moved ahead with a contract in the amount of $9,000 to construct a pad at the controversial site to contain 2 dumpsters and enclose the site with decorative brick. The contractor dug the footings for the pad, put in the rebar and purchased the decorative brick. With continued outrage from both Sandy Bottoms and the condo owners, the city served the contractor with a stop work order. Mind you, the contractor had already purchased brick and done work totaling $6,000. After considerable discussion at a previous City Commission meeting, thanks to Commissioner Poynter, the commission voted on a new dumpster site, this time for only one, not two dumpsters as originally planned, to be located in the median of the parking area at Main Beach, convenient to both the condo building and Sandy Bottoms. The condo owners agreed to pitch in $6,000 to pay for the work already done. Problem solved, right? Read on…

By issuing the stop work order on the original contract, the city in effect terminated the contract. There was never language in the contract that spoke to returning the abandoned site to its original condition. Nor did the language of the contract allow the city to say, “Oops!” Now we want you to start over in a new spot. Enter Glenn Semanisin, the city engineer. He exercised the city’s option to go out on an RFQ (Request for Quotes) to find a contractor to construct the new dumpster pad and wall surround. Firms he contacted responded with prices ranging from $5,500 (from the contractor who received the initial job) upwards. So, in recommending the FBCC award the contract to the low bidder, Semanisin asked for an additional $2,500 to add to the unspent $3,000 authorized for the first contract. That’s when the trouble began.

Commissioner Corbett kept insisting that approving such a recommendation would mean that the city was paying $11,500 for a dumpster pad. Commissioner Bunch said he was sure it could be done by a local for a lot less. Commissioner Pelican didn’t comment, but voted with them against the measure.

So where are we? Both Bunch and Corbett seemed to think city staff could easily handle this. Semanisin and the Mayor commented that with staffing cuts, the city no longer has the staff or the expertise to do brickwork. The city will, however, incur the expense of removing rebar and cleaning up the site that was abandoned. The final word was that of Vice Mayor Bunch, who directed Semanisin to “find someone cheaper”, even though Bunch passed on the opportunity to suggest any possible local firms qualified to do the work.

The next lowest quote Semanisin received was $6,000. But he has been directed to find something cheaper than $5,500, preferably local. Perhaps we can take up a collection? Or maybe we can let the Amelia Arts Academy work off their unpaid back rent by constructing the dumpster site?

But bear in mind that at the same City Commission meeting, a 4-1 vote (Vice Mayor Bunch dissenting) with no discussion authorized $500,000 for a new animal shelter. The Council on Aging also reminded the Commission that they will be coming back for the remainder of the $150,000 that the previous commission authorized for the new center ­ something like $66,000. I support both of these projects as part of the responsibility of the city to meet the health and safety needs of our residents and visitors.

Have you heard any calls for a public referendum on the animal shelter or the Council on Aging project from those who claimed that spending large amounts of money on special projects constitute taxation without representation?

Good luck on getting that new or renovated library building. By the time the FBCC gets through with that, paper will be obsolete.