Major Airports are re-designing the way we travel 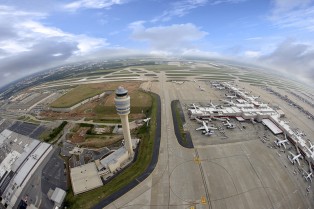 There is a lot of strategic positioning going on in the Travel Industry. With most airlines, except American, reporting profits for the first part of the year and many for the first time in several years, higher ticket prices, the “optimization” of available seats and the many add on cost structures seem to have worked for the airlines’ bottom lines, but consumers are getting increasingly more irritated. With even more capacity cuts in the forecast, travel will become a luxury thing again and the negative effects of these price hikes will cost many mass tourism destinations and visitor events substantial income. The Euro has climbed back up to $1.30 and with roundtrip “bargain fares hitting $800 and up, there won’t be a lot of Atlantic Puddle Hopping this year.

Last year’s Pétanque America Int’l Tournament here on Amelia Island attracted several hundred competitors from around the world and most had already registered at this time for the November event. Not so this year. Airfares from Europe and the Westcoast have doubled from last year and many players are waiting to find a window of price drops, if that is going to happen at all.

Destinations in many areas of travel that include air connections are starting to feel the effects. When I lived in St.Maarten a r/trip to San Juan Puerto Rico was on average $130 including fees. That same 120 mile distance trip is now $263 and that is qualified as economy supersaver and does not included luggage surcharges. Mind you there used to be a good shopping traffic between these islands, but shopping leads to luggage and luggage is now cost prohibitive. Consequently traffic is rapidly declining.  Besides the fact that economic supersavers represent only a small percentage of the available seats, the 2 other economy products sold, ‘saver’ and ‘flexible’, take these fares up $650 and higher, still without luggage allowance!
Now let’s compare this for a moment with Southwest Airlines’ shortest route roundtrip, from Ft.Meyers to Orlando Florida which is 133 miles and strategically has a similar destination connection as St.Maarten-San Juan Puerto Rico. The r/t fare is 30% cheaper on the super saver and 60% on the flexible which Southwest actually calls “Business Select”. And this is WITH luggage.

Airlines may have created themselves a temporary “profit” breather by deflating operations, but have to be careful not to overstep the line where people massively exercise alternative travel options as in location choice, transportation choice or staycation choice, while business travel is already shifting majorly towards internet connect opportunities without the need to physically travel.

In my opinion Southwest business model is the future of air travel, but requires management techniques and business models based on long term service. In 2009 Southwest recorded roughly $10 billion in operational revenue and $99 million in net profits. It was also the 37th consecutive year of profits for the Dallas based company.
Southwest is the largest domestic airline with almost 600 planes in rotation, yet it accepts a net profit position of 1% of the total revenue. The industry knows that Southwest hedges fuel with a razor blade, which is why they even made profit when the rest of the nation buckled under exorbitant prices back in 2008.
Comparisons are very informative.

While airlines returned to profitability by shrinking capacity, the cruise industry is trying to ride the consumer wave of vacation security, while having expanded its capacity substantially over recent years.
The cruise ship companies have a double edged business approach as the cruising hemispheres have expanded from the Caribbean, Alaskan and Mediterranean mass destinations to Australia, China, Dubai, Antarctica, the Indian Ocean archipelagos and soon all the islands of Indonesia, Borneo and New Guinea. Even the Canary Islands off the Morocco coast is starting island cruising.
Cruise ships are starting to play the higher trip fare card as well, because customers are geared towards all inclusive and safety.
The Norwegian Epic launched last month, while RCCL’s and Carnival’s mega ships are offering an ever more exciting product diversification.
Personally I love the Epic’s idea of renting a Gibson Les Paul upon check in and maybe spend an evening jamming in the on board Blues Club with BB King or Joe Bonamassa. I’d pay some bucks for that.

Another positioning is the expansion of homeports. Even Jacksonville/Mayport has a homeport function for Bahamas cruises by Carnival Cruise Lines.
Many US coastal city are preparing to function in the future of cruise ship home porting, which will take substantial revenue away from airlines.

As a consequence of these development and growing transportation logistics, major airports around the world and especially in the US are positioning themselves to become general transportation hubs. With the shift to cargo profitability, interstate connections, railroad and bus concentration and usually plenty of space to build consolidation and trans-shipment warehousing, airport managements are pushing for rapid deployment of these functions, which will de-prioritize passenger traffic.

An airport like Hartsfield in Atlanta is set in acres and acres of space, with major Interstate Highways connecting east to west, to north and south. The city has always been a major intersection for roads and railroads and transportation logistics and the airport’s current focus looks at growth opportunities beyond 2030 and that does not include passenger terminal expansions.

The growing importance of major airports as transportation hubs is redesigning the way we travel.