The Scottish Highland Games is an event in which clans come together to test their mettle in seven traditional Scottish athletic events. 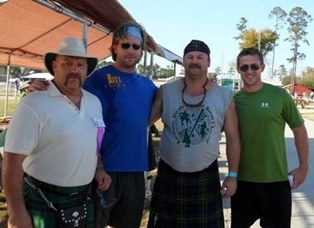 I love men in kilts!

This is why I was excited to attend the NE Florida Scottish Highland Games this past weekend in Green Cove Springs, Florida. I know what I said about men in plaid shorts The Bad Plaid Fad or Real Men Don’t Wear Plaid Shorts, but a kilt is an altogether different story.

It was a gorgeous weekend to attend the Games and the weather was great too. There were men wearing sleeveless t-shirts, tank-tops, shirtless, and even Prince Charlie jackets with their kilts. Besides the kilts and tartans, there were vendors, highland dancing, animals, children’s games, and clan members from all over the world to cheer on their competitors in the Games.

The Scottish Highland Games is an event in which all of the clans come together to test their mettle in seven traditional Scottish athletic events. Clan societies participate in the Highland Games annually. Visitors to the event can find out about their Scottish roots and join various clans if they want. 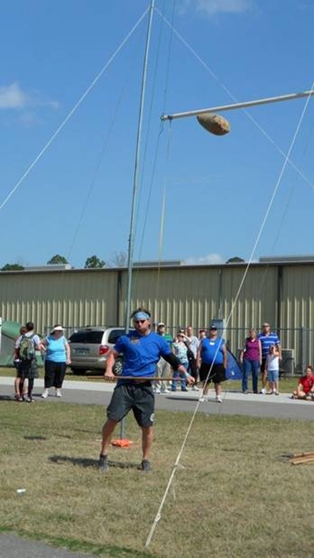 The athletic events include: throwing 28-pound and 56-pound weights for distance, tossing a 22-pound “Stone of Strength” or Braemar Stone, the Sheaf toss, Scotch hammer throw, weight for height, and flipping an 18-foot wooden “caber” pole.

The last one is probably the most famous. A caber is a 90 to 120 pound log that averages 18 feet in length that is held upright against the shoulder while the athlete runs a short distance and then tosses the caber end-over-end, so that it falls directly away from the athlete in a “12 o’clock” position. Points are deducted according to the number of degrees it varies from that perfect position. Athletes are allowed three tosses.

Being Scottish is not a requirement to participate in the Highland Games. One such non-Scotsman is our very own Doug Lane of Club14 Fitness, Amelia Island Crossfit and Sandbox Athletics fame. Doug participated in all 7 events. Incredibly, he placed 1st four times, and placed 2nd and 3rd once. Being the amazing athlete that he is, he even took home the trophy for best overall! (Too bad he wasn’t wearing a kilt!)

In addition to the competitions of skill and strength, and lots of men (and women) in kilts, the Games also featured great Scottish music including: bagpipe bands from the Clay County Sheriff’s Office Pipes & Drums and the Ancient City Pipes & Drums from St. Augustine; the Celtic rock bands Seven Nations and Mother Grove; and Scottish traditional music from Highland Reign.