For 75 years, dogs, thimbles, cannons, irons and cars have been making their way through Atlantic City by the roll of the dice. 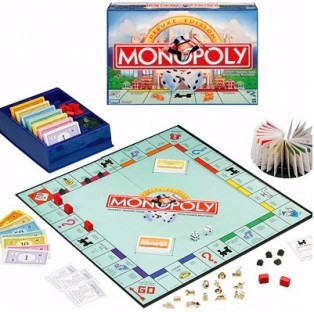 MONOPOLY, the board game, went on sale in stores on February 6, 1935. For 75 years, dogs, thimbles, cannons, irons and cars have been making their way through Atlantic City by the roll of the dice. (Wasn’t I always the hat?)

Charles B. Darrow, of Germantown, PA, brought the game to Parker Brothers at the height of the Great Depression. The game was rejected. Darrow was unemployed and his friend in the printing industry helped him publish the game alone. 5,000 handmade sets of the game were sold to a department store in Philadelphia. Darrow returned to Parker Brothers in 1935, when he could no longer keep up with the growing demand for his game and this time they accepted Monopoly.

There are plenty of tips for playing the game on the MONOPOLY website and the trivia site has some interesting information as well, such as, “In Cuba, the game had a strong following until Fidel Castro took power and ordered all known sets destroyed”. You can also learn the name of the jailbird, the officer who put him in jail and find out who Mr. Monopoly really is.

Are you planning a fund raiser for you favorite charity? Hosting a MONOPOLY Board Game Tournament is a great idea. Hasbro offers a free 28 page guide for holding a tournament and their tips are fantastic.

I went upstairs and pulled our old MONOPOLY game from the closet and smiled at how tattered and torn the box has become. I read a few rules and realized my older brother had lied to me; and I have passed down some incorrect rules to my own children. As soon as I finish writing this article I am going straight to the store. I will not pass GO and I will not collect $200.00. I will go directly to the store, park in their “free parking” lot and buy the deluxe edition of the MONOPOLY game for my family; but this time, I am actually going to read the rules myself!