Most People Don’t Think Time Change is Worth the Hassle

Ben Franklin brought us the idea while he was in Paris France, which makes me think that old Ben liked his Vin Rouge. Daylight Savings Time is upon us. 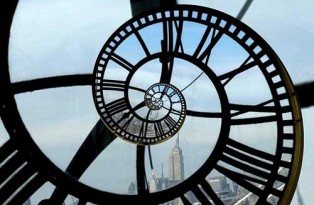 Daylight Savings Time is a nuissance

And another time change is at our front door, while most people actually feel the whole ordeal is just not worth the hassle.  My wife is looking forward to it however, as she can sleep a bit longer in the dark and go on her bike in the evening. As many people as there are for, there are against the shift.  For most Americans, daylight saving time 2011 starts at 2 a.m. on Sunday, March 13, when most states spring forward an hour. Time will fall back to standard time again on Sunday, November 6, 2011, when daylight saving time ends. Contrary to popular belief, fhe federal government doesn’t require U.S. states or territories to observe daylight saving time, which is why residents of Arizona, Hawaii, Puerto Rico, the Virgin Islands, American Samoa, Guam, and the Northern Marianas Islands won’t need to change their clocks this weekend.

As we have all learned over the years daylight savings has been known to cause some problems.
National surveys by Rasmussen Reports, for example, show that 83 percent of respondents knew when to move their clocks ahead in spring 2010. Twenty-seven percent, though, admitted they’d been an hour early or late at least once in their lives because they hadn’t changed their clocks correctly.
It’s enough to make you wonder—why do we do use daylight saving time in the first place? Well just remember that not everything that came from Ben Franklin was a jewel in the rough.
Ben Franklin—of “early to bed and early to rise” fame—was apparently the first person to suggest the concept of daylight savings, according to computer scientist David Prerau, author of the book Seize the Daylight: The Curious and Contentious Story of Daylight Saving Time.

While serving as U.S. ambassador to France in Paris, Franklin wrote of being awakened at 6 a.m. and realizing, to his surprise, that the sun would rise far earlier than he usually did. Imagine the resources that might be saved if he and others rose before noon and burned less midnight oil, Franklin, tongue half in cheek, wrote to a newspaper.
“Franklin seriously realized it would be beneficial to make better use of daylight but he didn’t really know how to implement it,” Prerau said.
It wasn’t until World War I that daylight savings were realized on a grand scale. Germany was the first state to adopt the time changes, to reduce artificial lighting and thereby save coal for the war effort. Friends and foes soon followed suit.

In the U.S. a federal law standardized the yearly start and end of daylight saving time in 1918—for the states that chose to observe it.
During World War II the U.S. made daylight saving time mandatory for the whole country, as a way to save wartime resources. Between February 9, 1942, and September 30, 1945, the government took it a step further. During this period daylight saving time was observed year-round, essentially making it the new standard time, if only for a few years.

Since the end of World War II, though, daylight saving time has always been optional for U.S. states. But its beginning and end have shifted—and occasionally disappeared.
During the 1973-74 Arab oil embargo, the U.S. once again extended daylight saving time through the winter, resulting in a one percent decrease in the country’s electrical load, according to federal studies cited by Prerau.
Thirty years later the Energy Policy Act of 2005 was enacted, mandating a controversial monthlong extension of daylight saving time, starting in 2007.

But does daylight saving time really save any energy?

But other studies do show energy gains.

But Wolff, one of many scholars who contributed to the federal report, suggested that the numbers were subject to statistical variability and shouldn’t be taken as hard facts.

And daylight savings’ energy gains in the U.S. largely depend on your location in relation to the Mason-Dixon Line, Wolff said.
“The North might be a slight winner, because the North doesn’t have as much air conditioning,” he said. “But the South is a definite loser in terms of energy consumption. The South has more energy consumption under daylight saving.”

For decades advocates of daylight savings have argued that, energy savings or no, daylight saving time boosts health by encouraging active lifestyles—a claim Wolff and colleagues are currently putting to the test.
“In a nationwide American time-use study, we’re clearly seeing that, at the time of daylight saving time extension in the spring, television watching is substantially reduced and outdoor behaviors like jogging, walking, or going to the park are substantially increased,” Wolff said. “That’s remarkable, because of course the total amount of daylight in a given day is the same.”

But like with everything in the life of human beings, others warn of ill effects.
Till Roenneberg, a chronobiologist at Ludwig-Maximilians University in Munich, Germany, said his studies show that our circadian body clocks—set by light and darkness—never adjust to gaining an “extra” hour of sunlight to the end of the day during daylight saving time.
“The consequence of that is that the majority of the population has drastically decreased productivity, decreased quality of life, increasing susceptibility to illness, and is just plain tired,” Roenneberg said.
One reason so many people in the developed world are chronically overtired, he said, is that they suffer from “social jet lag.” In other words, their optimal circadian sleep periods are out of whack with their actual sleep schedules.

Yet other research hints at even more serious health risks.
A 2008 study in the New England Journal of Medicine concluded that, at least in Sweden, heart attack risks go up in the days just after the spring time change. “The most likely explanation to our findings are disturbed sleep and disruption of biological rhythms,” lead author Imre Janszky, of the Karolinska Institute’s Department of Public Health Sciences in Stockholm.

With verdicts on the benefits, or costs, of daylight savings so split, it may be no surprise that the yearly time changes inspire polarized reactions.
In the U.K., for instance, the Lighter Later movement—part of 10:10, a group advocating cutting carbon emissions—argues for a sort of extreme daylight savings. First, they say, move standard time forward an hour, then keep observing daylight saving time as usual—adding two hours of evening daylight to what we currently consider standard time.
The folks behind Standardtime.com, on the other hand, want to abolish daylight saving time altogether. Calling energy-efficiency claims “unproven,” they write: “If we are saving energy let’s go year round with Daylight Saving Time. If we are not saving energy let’s drop Daylight Saving Time!”
But don’t most people enjoy that extra evening sun every summer? Even that remains in doubt.
National telephone surveys by Rasmussen Reports from spring 2010 and fall 2009 deliver the same answer. Most people just “don’t think the time change is worth the hassle.” Forty-seven percent agreed with that statement, while only 40 percent disagreed.

But Seize the Daylight author David Prerau said his research on daylight saving time suggests most people are fond of it.
“I think the first day of daylight saving time is really like the first day of spring for a lot of people,” Prerau said. “It’s the first time that they have some time after work to make use of the springtime weather.
“I think if you ask most people if they enjoy having an extra hour of daylight in the evening eight months a year, the response would be pretty positive.”