Did you ever want to know where Nassau County turns into Fernandina Beach? Prepare for many surprises. www.nassaugis.com 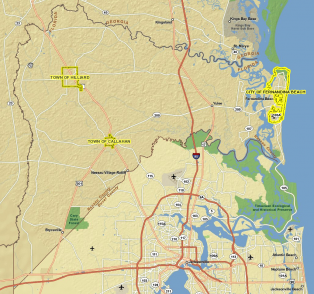 There is a website (www.nassaugis.com) here in Nassau County that reveals every map you could ever want and need of the county, the City of Fernandina Beach and the townships of Hilliard and Callahan. I was first alerted to the site by my friend Lila Keim, as I was researching the new Floodzones that go into effect on December 17, 2010. That by itself is information you should pull from the website as it will effect your premiums in the near future, since FEMA apparently moved the zones “up the hill” as my friend Shaun phrased it; here is the link .

Since Nassau GIS is directly related with a link to the County’s Property Appraiser site, my interest was caught and 2 hours later I looked away from my computer screen with more questions than answers.
Since I am naturally curious, I have been querying about why the City of Fernandina Beach has such a warped outline on the island and consequently I’m curious about allocating which government services come with my taxes and my particular location.

But before I get ahead of myself let me first give you an inclination of what I’m talking about.

First of all the outline of Nassau County itself. What an administrative nightmare it must be to find the county’s borders stretching all the way down southwest to a point south of Interstate 10, which is now situated for about a mile inside of Nassau County territory, almost touching MacClenny in Baker County. Unless there is a good federal funding reason for this stretch, what’s the deal? Geographically this county is almost situated as badly as Monroe County from Key west to the Everglades.

I could make additional notes on why Callahan and Hilliard are called townships, and Yulee is denied that status. What exactly is Yulee, besides David Yulee’s pipedream? I could also wonder why the United States Post Office includes parts of Nassauville and Barnwell Rd. as well as the North Hampton development beyond Lofton Square in the Fernandina Beach zip codes while the map clearly says they’re not. There are well documented stories that many people interested in residing in North Hampton demanded a Fernandina Beach address before they would purchase there!? Yulee was not meant to be a people favorite I guess. On the other hand I have been driven around Yulee’s Marshes on Saturday mornings and my camera tells me that Yulee’s outskirts are getting the short end of the stick in their idyllic marshfront settings.

So what happened here on island? 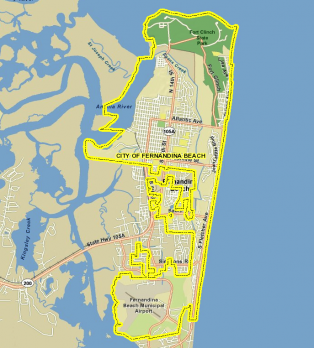 No clue what happened here!

Starting with coming over the bridge onto Amelia Island, A1A  or 105A or SR 200 becomes St. 8th Street, a County road; a situation that continues even after turning right on Sadler and I conclude correctly that from Applebee’s up to and including the Kofe House are in the County, but CVS abruptly turns into City. Another strange arbritary twist turns East Oak St. behind Prosperity Bank and Fancy Sushi, County which puts Pétanque America’s warehouse in the county as well as 14th Street from that point to past Simmons St., while Sadler Rd towards the beach turns County again behind Amelia Attic and becomes city again a bout 50 yards further on. Not even mentioning long stretches on Citrona that are county, while the Putt-Putt on Sadler is a complete enigma as a county enclave surrounded by city?

At the Lime St. intersection is where 8th St becomes part of the city and the city gets greedy crossing the Amelia River to be included in city property. From here on the port is squarely placed inside of the city limits, while the 14th Street Public Ramp is another County enclave. I’m so happy that I’m not in law enforcement or emergency management, because the potential headaches from this idiocy is mindboggling.

Yes, I have spent quite some time today on trying to make sense of this map and frankly I give up. Maybe you want to take a look and form your own opinion. As far as I’m concerned I just hope I’ll never become an issue of confusion between Sheriff’s Office and Police Dept. or which Emergency Service will reach me first. Not even talking about garbage pick up or sewage/ water management or which government entity is likely to raise taxes first.

I just know that it all at once has become important to exactly pinpoint the governmental jurisdiction of my property.