Natalie Wood’s Mercedes to be at Amelia Concours

Natalie Wood's Mercedes-Benz is just one vehicle to appear among other legendary Hollywood Star Cars at the Amelia Concours. 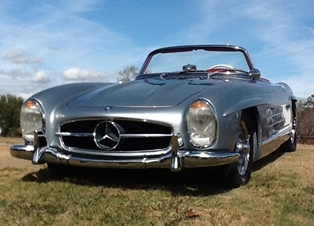 Natalie Wood’s Mercedes-Benz is just one vehicle to appear among other legendary Hollywood Star Cars once belonging to Ginger Rogers, Rita Hayworth and Tom Mix.

The motion picture and the automobile came of age together. By the late Twenties movies began to talk and cars became practical daily transportation. A few grand marques, like Duesenberg and Cadillac, also became badges of status and social rank. Power, speed and exclusivity were coin of the realm.

By the Fifties a new type of car had emerged as Hollywood’s favorite. Mercedes-Benz’s 300SL had won Le Mans in 1952 and become the new high technology flagship for the venerable German marque. Speed, power and exclusivity still mattered most to Hollywood’s elite and, with Mercedes-Benz’s Le Mans one-two victory, impeccable and incomparable built quality, the 300SL had no trouble occupying the same Hollywood role Duesenberg had two decades earlier. Like the Duesenberg, 300SLs even appeared in several movies, most notably Elvis Presley’s Viva Las Vegas.

Natalie Wood’s personal 300SL stood out from all other cars on Hollywood’s streets. Wearing optional Rudge knockoff wheels, her 300SL was already rare. But it was Wood’s sense of esthetics that really set her 300SL roadster apart.

“She had it painted pink,” said Bill Warner, founder and Chairman of the Amelia Island Concours d’Elegance, “Pink with a lipstick red leather interior, as if driving a 300SL around Hollywood didn’t attract enough attention.”

Wood was a star for practically her entire life. At the age of nine she starred in her first movie, the Christmas classic Miracle on 34th Street (1947), with John Payne and Maureen O’Hara. Just a decade later the starlet took delivery of her 300SL. That December she married actor Robert Wagner.

Natalie’s Mercedes-Benz 300SL will compete in the 300SL class at the Amelia Concours honoring the 60th anniversary of Mercedes-Benz first Le Mans win in 1952. Today it wears a traditional, factory approved silver-blue color. A meticulous restoration made certain that all the details in Wood’s national award winning 300SL are correct. Such small details as the period-correct Becker in-dash radio and even the ownership documents in the glove box and the proper type of hose clamps were installed to restore the elegant German roadster to showroom condition.