Recently, I published a story , ‚ÄúFlabby Tabby or Plump Pup‚Äù describing this growing issue, but at the time I wrote the article, I had no idea we were approaching epidemic proportions. (No pun intended.) 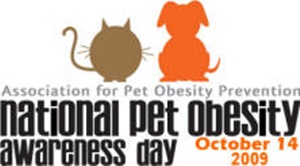 National Pet Obesity Day is October 14. Dr. Ernie Ward, founder and president of the Association for Pet Obesity Prevention said, “This is the first generation of pets that will not live as long as their parents. Even worse, the majority of today’s overweight pets will endure painful and expensive medical conditions – all of which can be avoided.”

Is it not enough that our glutinous American lifestyle is killing our youth that now we are accused of overfeeding and under exercising our pets? Now there is a day dedicated to awareness.

Recently, I published a story on SearchAmelia called, ‚ÄúFlabby Tabby or Plump Pup‚Äù describing this growing issue, but at the time I wrote the article, I had no idea we were approaching epidemic proportions. (No pun intended.)

Dr. Ward continues, ‚Äú‚ÄôPudgy pooches and fat cats are now the norm.‚Äô To raise awareness about the dangers of pet obesity, APOP will hold its third annual National Pet Obesity Awareness Day on October 14th, where hundreds of veterinarians will gather data on the waistlines of our nation’s pets. Pet owners may log onto the group’s website and answer questions and report their pet’s size and weight.‚Äù

It is estimated that over ¬Ω of the dogs and cats in America are considered obese. This is costing pet owners millions of dollars in veterinary bills that are unnecessary, not to mention the crippling side effects to man‚Äôs best friends. Arthritis, diabetes and cancer are just a few of the conditions that are increasing in an alarming rate. We are literally, loving our pets to death!

Carbs, as in humans, tends to be of major concern. The best treatment for your pet, is the recommended treatment for us. Eat less and exercise more. If you aren‚Äôt willing to take care of yourself, maybe you are concerned enough about the health of your pet. Take them for a walk, run with them on the beach (if you live near one) or in the marshes and woods or let the game of ‚Äúfetch‚Äù last a few extra minutes. Both of you will reap the benefits of a more active lifestyle.