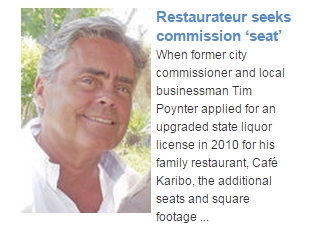 The Fernandina Beach News-Leader is part of the privately owned Community Newspapers Incorporated chain of weeklies and it can print whatever it sees fit. But there is little virtue in having editorial and news pages that the paper’s masthead says are “…dedicated to the truth, integrity, quality and hard work” and whose aim is to expand the horizons of its readers if those pages contain sycophantic suck-up endorsements and blatantly false claims, and its news pages are edited to paint a picture preferred by a stridently prejudiced publisher and editor on personal vendettas, who knowing they can’t win intellectual arguments, seek to influence opinion by portraying those they oppose with an editing pen dripping with bias, animosity, innuendo and omission. Its editorial pages bear a greater similarity to a psychological disorder than they do to standard political discourse.

The Internet and the online upstart Fernandina Beach Observer newspaper have helped expose the paper’s demonization of those not in its favor, but it is still up to what’s left of the News-Leader’s readers and subscribers to sort the wheat from the chaff, but sometimes they need assistance.

For example, the paper has dutifully been running verbatim press releases on the bottom right front page submitted by candidates running for the Fernandina Beach City Commission. However, readers wouldn’t know if these releases have been edited if they haven’t seen the original press release as was the case with candidate Tim Poynter when the paper’s editor and/or publisher struck the following from Mr. Poynter’s submission: He was the only commissioner to oppose the proposed FY2012-13 city budget that called for both higher taxes (a 15 per cent increase, the highest in ten years) and higher franchise fees.

Maybe that sentence would make the paper’s endorsement by its publisher, Foy Maloy, of the two folks (Charlie Corbett and Sarah Pelican) who have actually increased taxes, but are running on a platform of lowering them, appear awkward and foolish. Maloy also credited Corbett and Pelican with accomplishments (library expansion and train depot restoration) that belong to the last commission which included Poynter and were paid for with funds from the Forward Fernandina project, a program that an obviously confused Maloy criticized with all the finesse of a guy leaping into the nosh pit just as the crowd parted.

But the heartiest yuks came this past this past Wednesday in an above-the-fold front page piece headlined “Restaurateur seeks commission ‘seat'” bylined by the paper’s editor, Michael Parnell, that was a detailed story about all the laws, permitting rules, and regulations that Tim Poynter meticulously followed while opening and expanding his downtown eateries.

Parnell, doing an exceptional imitation of a Mother frantically searching for a Playboy Magazine hidden under her son’s mattress, tried his best to portray Poynter as someone who took advantage of his commission seat to get around the various permitting and regulations, but came up empty handed.

His story asked: “Did the then city commissioner receive favorable treatment from the city in obtaining his permits?” The answer was a resounding “NO.” City Manager Joe Geritty said he didn’t. Parnell even stated that there is “No evidence that Poynter or his businesses acted illegally…” Oh, Parnell failed to mention that Poynter received almost a $10,000 refund on impact fees proving that he paid what was due, but apparently that didn’t fit into Parnell’s story line. He also failed to mention that Poynter laid out thousands of dollars to redo inside and outside doors and storage areas of his existing restaurant to comply with a city inspector on his first day on the job. Oh, by the way, Poynter’s businesses employ some 55 local people, more I’m betting than the News-Leader. So what was the point of the article Mr. Parnell?

Obviously the facts got in the way and Parnell, on a tight deadline, was left with a non-story to plug a gaping hole on the front page that certainly raises questions about the credibility — not of Poynter — but of the paper and Parnell’s “journalistic” credentials. In its rush to print what they hoped would be a scathing expose it ended up scrambling to publish a piece that is an embarrassment to the paper’s owners and its staff and leaves no doubt as to why it is losing subscribers and advertisers faster than passengers abandoning a cruise ship with an Ebola outbreak.

While the News-Leader buries, forgets, ignores or lies about gaffes, misstatements and blunders by the current Curly, Larry and Moe commission trio it enthusiastically and blindly endorses, it comically does pratfalls as it tries to conjure up images of those it opposes as frivolous ne’er-do-wells. News-Leader targets can take comfort in the late British Prime Minister Margaret Thatcher’s comment: “I always cheer up immensely if an attack is particularly wounding because I think, well, if they attack one personally, it means they have not a single political argument left.”

Personally I’m voting for Poynter, a former commissioner and owner of two downtown businesses, whose four kids grew up here and who has a vested interest in the community’s success and understands city government inside and out; and Robin Lentz, a bright and energetic young lady and county educator so dynamic she was named teacher of the year her rookie year and who has two young children she wants to grow up in a vibrant, healthy community that she can help shape.

The Corbett-Pelican duo scare me, because if re-elected they might violate their long-standing political credo of “Don’t just do something. Stand there” — thereby creating havoc within the city.

The saddest part is that ridiculous and insubstantial candidates can run for city office and, until recently, no one ever knew because the News-Leader didn’t report it, worse they endorsed them. That is all changing.