Nothing Changed That Night

The only balance in human nature comes from a status quo of knowledge and power. Break the 50/50 balance and mayhem is on the horizon. 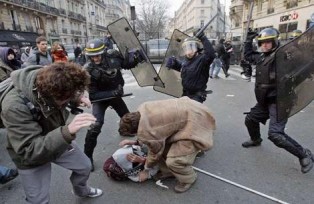 As history keeps repeating itself, I realize that human behavior and shifts of power are totally predictable if you know the signs. A couple of days ago I shared with you that my New Year’s agenda included finishing at least one of the 3 novels I have been warming up for the past 16 years. Two of those are historic fictional action stories and one is an account of my “other” life between the Spring of 1968 and the Summer of 1985 and I titled it “Rainbow Runner”.

As I was reading an account of what happened in Belarus, a former USSR territory, on December 19, just three weeks ago, the description of what took place in the riots in its capital city of Minsk, took me back to Paris 1968, when a more “private” part of my life’s chapters started to unfold.
Eyewitnesses reported that things didn’t go over the edge that night on the streets in Minsk, because people are just in the first stage of anger and disbelief with their government, but I was thinking about how quickly things can change. The people were in a peaceful demonstration until the police started shedding blood and beating peaceful, unarmed people, including women. It reminded me of the amazing speed with which the “thin veneer of civilization” can be stripped away when the power of injustice spreads like a wildfire. It reminded me of that riotous afternoon in Paris in 1968 when a young teenager with a great skill in martial arts witnessed a young pregnant woman being beaten by no less than 3 gendarmes, and what followed changed his life forever.

And once again I realize that unprepared ignorance is an invitation to injustice and violence. No matter where you live, even in the United States, it’s dangerous wishful thinking to tell yourself, “It can’t happen here.”
From an economic point of view I can’t shake the insight that the old world order is rapidly going to change. Even if there is more physical wealth in the world today, in the form of factories, homes, powerful technologies, etc., there is also massively more debt. Governments – first-world governments and banana republics – are sliding towards default, and most individuals have little or no savings or have their savings tied up in a deflating gargantuan real estate bubble.

The plain truth is that we’ve already gone beyond the point of no return. There is simply no way the U.S. and Europe’s governments  can pay all their obligations without defaulting or destroying the dollar and Euro – which is just a different kind of default. There is no way around the fact that a lot of people will have to make painful adjustments.

I am not necessarily talking about violence, although no one should exclude that possibility. The human race has chosen that route too many times, to ignore the possibility. This year we are “celebrating” the start of the Civil War a mere hundred and fifty years ago, a dark chapter in a peaceful progress, I may remind you. But I prefer to think that most of the world’s wealth will still exist after the crash, but it will change hands.

Sound advice would be to start teaching Mandarin in schools because we’ll need it to do business in the new world after the crash – or to get a job as a servant, working for those who do learn to do business in the world after the crash.
Be prepared to accept that “it can happen here.” Maybe not this year, maybe not for several years, but when the real currency crash gets underway, it’ll be unstoppable, and it will destroy the status quo with a speed that will leave most people without any means other than what they carry on themselves.

And yes I know it is unsettling to sound an alarm; yet I don’t feel like apologizing for advising people to prepare. The only balance in human nature (at least so far) comes from a status quo of knowledge and power. Break the status quo or 50/50 balance and mayhem is on the horizon.
Therefor my mantra dictates liquidation, consolidation, speculation, creation and preparation and leave yourself enough space to diversify your political risk exposure – in other words, have a safe place to go other than the family farm, that we all ran away from to make it big in the city.

Be prepared in case the world fails to make it through chapter 13 in a reasonably orderly manner. Most of all learn how to become financially independent.