The newspapers are a-buzz with stories of Obama's trip to China. The Financial Times tells us what "he should have said." 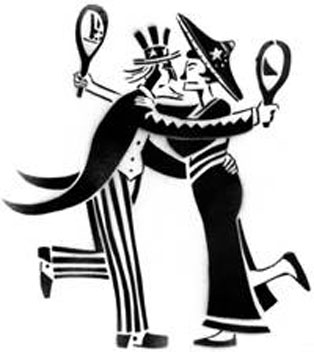 US and China, dancing without trust

The only thing I hate as much as paying taxes is moving. My wife and I have sold our “estate” here on Amelia Island and are down sizing in a wonderful Fernandina Beach neighborhood. During the excavation process today we moved our precious metals stash to our local bank vault for safe keeping during this period. Where else in this out of control world would your local banker/friend give you a Red Radio Flyer wagon to haul your stash to your box? Life is sweet on this island.

With moving and all, time went by fast today and our publisher’s deadline is at hand and I haven’t composed the first word for an article. But, I had wanted to share a great report on our President’s China trip by my favorite Capitalist Philosopher and CEO of Agora Financial Publishing, Bill Bonner. So Relax and enjoy, here it is:

The newspapers are a-buzz with stories of Obama’s trip to China. The Financial Times tells us what “he should have said.” According to the FT, the American president should have told the Chinese that he wasn’t going to put the US into depression just to protect the value of China’s dollar holdings. ‘We didn’t ask you to stock up all those dollars,’ as Obama might have put it. ‘It’s not our fault if the dollar goes down and you lose money.’ Perhaps Mr. Obama should have quoted the immortal words of a former US Secretary of the Treasury, John Connolly. “It may be our dollar, but it’s your problem.”

Over at USA Today, the editors are more concerned about human rights. The paper must imagine itself back in the days of Woodrow Wilson or George W. Bush, when the US nobly embarked on a mission to raise all of mankind out of sin and error. In effect, Mr. Obama said that all people have ‘universal rights,’ including the right to a free press. China figured this was just the sort of opinion that its people didn’t need to hear. So, it killed the story in its own press. The American president might as well have been talking to himself. China is today’s big story. Throughout the world’s media there is much buzz and blather about the “romance”… the “historic relationship”… between the two titans. Some reporters see love. Some see jealousy. Some see rivalry. Here at Agora we are suckers for romance. Give us “a cigarette that bears a lipstick’s traces…an airline ticket to romantic places…” and we are moonstruck. But we don’t see much romance in the US and China hook up.

What we see is the sort of things that delight psychologists and bore everyone else – perversion, co- dependency, and enabling. On the surface, the two giants bicker over money like any other couple. The US accuses China of being a tightwad…holding its currency down and saving too much. China accuses the US of being a spendthrift, destroying its own purchasing power by wanton and reckless expenditures. “US president’s currency call breaks with script,” says a headline in The Financial Times today.

US economists think China should raise the value of the yuan. This would immediately lower the value, domestically, of the trillion(s?) worth of US-dollar assets China holds as reserves. It would also make Chinese products less competitive on the world market. Mr. Obama wasn’t supposed to say anything about it on his trip. It would be like bringing up your husband’s drinking problem on your wedding anniversary; it would spoil the occasion.

Apparently, Obama couldn’t help himself. Or maybe he just thought the folks back home would like to hear him give the Chinese a piece of his mind. But how does the American president know what price to put on the yuan? A sinking dollar is good for the goose over in the US. Why isn’t it okay for the gander in the Middle Kingdom? A strong yuan would help the world economy “re-balance,” say economists who think they know what they are talking about. In a nutshell, the Chinese produce too much; Americans consume too much. A higher yuan would come down on the high side of the scale – giving the Chinese more purchasing power (thus increasing consumption in the Peoples’ Republic)… and making Chinese exports more expensive (thus decreasing consumption across the Pacific).

With a stronger yuan, the Anglo-Saxon economies would be able to produce and sell more things to the Chinese…thus tilting the US economy more towards capital formation and production. Chinese authorities are no dopes. They know they have a “floating” population of some 150,000 million people who are looking for work. They know that if they don’t find some way to keep these people occupied they are likely to cause trouble. Trouble is the thing China’s leaders most don’t want. “You think you’ve got trouble,” Premier Hu Jintao might have replied to Mr. Obama. “Did you know that there are something like 200 million Chinese who still get by on as little as a dollar a day? Let’s face facts. You’re sitting there in Washington, comfortably talking about how much free health care and unemployment benefits to give the American people. We don’t have the time…or the money for those kinds of things. Too many Chinese people. They don’t earn enough to afford the kind of cradle-to-grave bribes you give your people. We have to keep them working; there’s no other way. “Besides, we don’t quite see why we should pay for your mistakes. It wasn’t our economy that blew up. It wasn’t our financial industry that sold houses to people who couldn’t afford them. It wasn’t our consumers who spent more than they had and went too deeply into debt. “It’s the debtor who’s supposed to pay, not the lender. We’re the lender!”

Behind all the superficial arguing, accusing and kvetching, however, is a sick relationship. It has give and take. But the US is all take. China is all give. And now, on both sides, public authorities make the same mistake. In the US, they try desperately to prod Americans to take more…to continue doing what they were doing wrong. They offer incentives of every sort to lure consumers to consume even more.¬† And their solution to the debt overhang is to hang on even more debt. In China, meanwhile, the authorities desperately prod their people to give more…to produce more. Or, at least to build more plant and equipment with which to turn out more goods. In the US, consumer spending is about 70% of the economy. In China, fixed capital formation is estimated to have made up 70% of China’s growth in 2008 and as much as 90% in the first half of this year. Is this a formula for a happy marriage? Over the last two years, this co-dependent relationship has broken down.

Paul Krugman wrote in The New York Times that we’ve seen “the greatest collapse in world trade in history.” But neither side has learned a thing. The taker now proposes to take more. The giver now proposes to give more.

They don’t need counseling. They need a divorce.