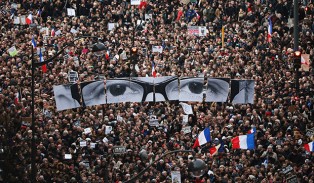 I’m mystified and frightened by the administration’s reaction to the psychopathic Islamic killers and the President’s and those in his administration’s refusal to call them what they are: psychopathic cold-blooded Islamic murderers, killing on behalf of their religion.
For example, the reaction by President Obama to the slaughter of the 17 journalists, police and others in Paris last week was as weak as his response to the 2009 killings in Fort Hood, Texas by an Islamic American US Army major that he labeled “workplace violence.”
The White House doused its comments in the stench of appeasement and cowardice when spokesman Josh Earnest refused to even call the Paris massacre an act of terrorism, and made sure to add the traditional non-sequitur, which now routinely follows Islamic terrorist attacks,  that “Islam is a religion of peace.” Obama issued his own statement keeping with his prohibition on using the term “Islamic terrorism,” he simply referred to the attack as “terrorism” — a vanilla expression conspicuously devoid of any descriptive term explaining the motivation behind the killings. At least he didn’t label it “workplace violence” but to the uninformed it could just as easily have been an act of eco-terrorism.

And even if Obama did threaten to act would anyone believe him? Remember the “line in the sand” threat to Syrian President Assad? Or his claim that he has decimated al-Qaeda? How about that he will eliminate ISIS? Obama and the apologists in his administration are origami experts, they just keep on folding.
Instead of fighting the Islamic madmen the Obama Administration has declared war on our own CIA and Department of Defense. And at Guantanamo he is releasing these maniacs back onto the battlefield faster than our armed forces could capture them.

The Paris killings are reminiscent of the Muslim reaction over the publishing of a series of cartoons in a Danish newspaper in 2006. In that instance homicidal Islamic madmen caused rioting that resulted in scores killed and many embassies attacked and consulates torched. Any western country would do, since Danish flags for burning appeared to be in short supply and not easily identifiable by the ignorant, enraged Muslim mobs. And the heck with political correctness — Norway, the UK, Germany, who cares, all Europeans look alike anyway.

Back then I saw a newscast with a 12 year-old boy in Islamabad, Pakistan sporting a slogan reading “O Allah give me courage to kill the blasphemer.” Apparently his folks went to a Muslim riot and all he got was a crummy “kill an infidel” T-shirt. And who hasn’t seen the videos of Muslims joyfully dancing and cheering in the streets when they heard the “good news” of the 9/11 attacks and when they hear of Christian and Jewish women and children being massacred anywhere, anytime? Muslim Shia and Sunni sects slaughter each other and Christians by the droves in Iraq; Muslims massacre Christian and Jewish women, children and the elderly throughout the Middle East; They kidnap and slaughter classrooms full of young school children all over North Africa, Pakistan, Afghanistan, etc; Hijack ships in African waters and kill the crews if ransom isn’t paid; Gleefully behead people and videotape the acts; Continually attempt to blow up passenger airlines; Set off bombs in Boston; Hack policemen to death in New York and London; Kill families and fire rockets into cities in Israel, and on and on.

I can only imagine what these Islamic nuts would do if they wised up and got angry about their own government’s and religious leader’s corruption and totalitarian leadership that perpetuate their economic deprivation, inadequate health care, lack of education and mindless propaganda.
These rampaging hordes aptly reflect the Lenin quote “Religion is the opiate of the masses,” and their leaders have administered an overdose. I have yet to read or hear another logical explanation by anyone that otherwise justifies this Muslim mass horror.

The day after the Paris atrocity USA Today published a column by a London-based Muslim cleric, Anjem Choudary, headlined “People know the consequences” asking why France would allow the paper to mock Islam, and further excused the murders as justified under Islamic law and confirming my belief that Islam is anything but a peaceful religion. He stated in the very first paragraph: “Contrary to popular misconception, Islam does not mean peace but rather means submission to the commands of Allah alone. Therefore, Muslims do not believe in the concept of freedom of expression……” Normally I would condemn USA Today for printing such garbage, but by doing so it allowed this nut to verify what many of us already know, and that is that Islam is violent. How would you like to live next door to this fruitcake or any others that think as he does?

At a time when the world is facing a situation as dangerous as the one Nazi Germany and militant Japan posed in the late 1930s and early 1940s we have a President who is probably the least qualified, most inept, naive, and ill-prepared person to ever occupy the White House… a community organizer whose acolytes wind him up, push him on stage then pull the string in his back so he grins and spouts meaningless platitudes. He makes Jimmy Carter look like a fierce warrior. Oh, and just last summer it was announced that a Muslim, Fatima Noor, will be a special assistant in the Office of the Director for U.S. Citizenship and Immigration Services (USCIS) in the Department of Homeland Security. Isn’t that comforting.

And as world leaders united in Paris this past Monday for a million man march displaying unity and voicing their opposition to Islamic terror, the US was conspicuously absent — with only its Paris-based ambassador attending. Some 40 world leaders including Israel’s Netanyahu and even the Palestinian Authority’s Abbas marched, but not Obama, Joe Biden or even John Kerry.

Democrats should be ashamed that their current standard bearer has dismissed the words of President John F. Kennedy who declared, “Let every nation know, whether it wishes us well or ill, we shall pay any price, bear any burden, meet any hardship, support any friend, oppose any foe, to assure the survival and success of liberty.”

The western world appears to be waking up and just maybe this hideous act by psychopathic barbarians in Paris rang the alarm, but apparently not one that can be heard by our do-nothing apologist and Community-Organizer-In-Chief who we are stuck with until January 2017, a very long and frightening two years distant.

Publisher’s Note: Maybe some of our readers disagree with using the Searchamelia platform to express an opinion of such grave  consequence, but with the writer of this opinion, it is our belief that tolerance is a virtue that can only be earned through respect and understanding. Fanatics of all religions (except a small number of Eastern Religions) have historically tried to impose their absurd, maniacal beliefs on the world. They were always met with overwhelming force that would ultimately eliminate the extremist position. But to get there, it requires decisive, independent, smart leadership and not puppets executing agendas of a different interest.