ISIS showed its ugly head already more than 3 years ago, yet by its ideology it's a greater threat to Saudi Arabia than any other country. 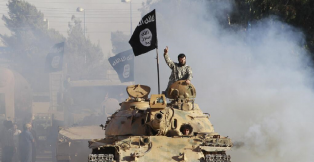 The Political Angle of a Global Threat

President Obama is slated to give a speech, outlining the White House’s call to action in the Islamic State threat. It has been widely in the news lately, especially since horrific images have filled social media calling the threat of ISIS more dangerous than Al Qaeda ever was. This morning at 3:43 our time I received an email from a friend in Dubai, who is uniquely qualified to shed a more informed light on the situation.

I would like to share the New York Times opinion article from Sept. 7 with our readers, just in case you missed it.

Catching up on my reading here in Dubai and this article does decent job of framing structure of what world is facing.

As ISIS continues to grow, many commentators have been pointing to Saudi Arabia as the source of the group, and most assume that the United States is the only force that can stop it. Both of these assertions are incorrect.

Saudi Arabia is not the source of ISIS, it’s the group’s primary target.

ISIS’ core objective is to restore the caliphate (an Islamic empire led by a supreme leader), and because Saudi Arabia is the epicenter of Islam and the custodian of the Two Holy Mosques in Mecca and Medina, ISIS’ road to the caliphate lies through the kingdom and its monarchy. Indeed, ISIS has even launched a campaign against Saudi Arabia, called qadimun, or “we are coming” to take over the country. Saudi Arabia has put the group on its list of terrorist sponsors, declared that funding ISIS is a crime with severe penalties, and arrested ISIS supporters and operatives over the past several months.

ISIS emerged not from Saudi Arabia but from postwar Iraq and the remnants of Saddam Hussein’s senior officer corps and their local support networks in Iraq and Syria. This has enabled ISIS to capture large swathes of land in these two countries and seize valuable economic, financial and energy assets, thus becoming financially self-sufficient. Now they are after Saudi Arabia’s riches.

The kingdom’s enormous oil fields and monetary wealth have always been coveted by Al Qaeda, as they are now by ISIS. Of course, with typical hypocrisy, while Al Qaeda and ISIS covet the kingdom’s riches, they also despise the way it has modernized in order to capitalize on that wealth – seeing it as having strayed from proper Islamic practices.

Why, then, do so many people believe Saudi Arabia is behind ISIS?

At the root of the claim that Saudi Arabia created ISIS is the belief that both entities practice a version of Islam called Salafism (erroneously known in the West as Wahhabism). While it is true that the kingdom espouses Salafism, ISIS’ claim that it is Salafi has no basis. Salafism is based on the word salaf, or “the ancestors,” referring to the way Islam was practiced by Prophet Muhammad’s early followers in the religion’s first three generations.

The Salafists believe that Islam should be practiced according to the dictates of these ancestors. Different interpretations of these dictates have occurred over time, leading to four schools of jurisprudence in Sunni Islam. The founders of these schools were Abu Hanifah, Malik, Al Shafi’i, and Ibn Hanbal.

ISIS follows an ideology that is a continuation of a crude sect known as the Kharijites, or the ones that “deviated” from the Muslim community during the reign of the fourth Caliph Ali (whom they assassinated). The Kharijites believed that whoever disagreed with them should be murdered as infidels (takfir), rationalized mass killings against civilians, including women and children (isti’rad), and practiced an extreme form of inquisition to test their opponent’s faith (imtihan).

These concepts make ISIS’ ideology the absolute opposite of Saudi Salafism. The version of Salafism applied in the kingdom’s courts and religious institutions was formulated by one of the four leading Muslim jurists, the ninth-century scholar Ahmad ibn Hanbal. Hanbali law stands firmly against sedition, shedding of blood, and forcible conversion.

One of Ibn Hanbal’s best known sayings typifies current Saudi theology: “Glory to God; shedding blood! Shedding blood! I do not consent nor do I command it; to observe patience in our situation is better than sedition that causes the shedding of blood.”

ISIS poses a unique threat: It is a bloodthirsty movement that can find disaffected young men and women and recruit them from among the world’s 1.3 billion Sunnis. It does not face the numerical constraints of groups like Hezbollah or countries like Iran, whose ideologies only appeal to the smaller Shiite community. With such enormous growth potential, ISIS must be defeated now.

Saudi Arabia is the only authority in the region with the power and legitimacy to bring ISIS down. Having effectively eradicated Al Qaeda in the kingdom, the Saudi government, with its experience fighting terrorism, is uniquely positioned to deal with ISIS, which is, after all, an Al Qaeda-aligned organization. The kingdom has built up an impressive counter terrorism program and its counterterrorism strategies are considered some of the most sophisticated and effective in the world.

More importantly, the Saudi leadership has a unique form of religious credibility and legitimacy, which will make it far more effective than other governments at delegitimizing ISIS’ monstrous terrorist ideology. The message sent to the Muslim and Arab worlds as Saudi Arabia takes on ISIS is radically different from – and much preferable to – the message sent if the United States does so, especially given America’s recent disastrous record in the Middle East.

When ISIS first appeared in Syria in 2011, Saudi Arabia tried to galvanize support for the moderate Syrian opposition against the murderous regime of Bashar al-Assad. But the world failed to listen.

Now, as King Abdullah of Saudi Arabia recently pointed out, ISIS is not only a threat to the Middle East, but to Europe and America. We call on the international community to form a solid coalition with Saudi Arabia to roll back ISIS’ military advances while at the same time supporting the kingdom’s ever increasing campaign to delegitimize ISIS in the eyes of the wider Sunni world, in order to ultimately destroy it.