A questionable grocery bag study squares of the dangers of environmental awareness against issues of health. 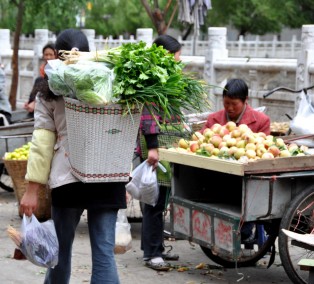 One way to show how life has changed is the evolution of the reusable shopping bag. While growing up a boyscout in Europe in the late 1950s, I often did a quick run to the grocery store for my mom, when she was in the middle of cooking and ran out of something. (To be honest, with five sons it was sometimes hard to keep track of the various food inventories.)

One thing I would never forget while running out the door and that was to grab the grocery bag that was hanging on a hook next to the door. If I forgot, I would have to face the uncomfortable task of having to carry 4 or 5 items in my hands on the way back. Grocery stores had no plastic or paper. On the occasion that I forgot, the friendly owner would give me a box to put stuff in.

Until today, there are very few stores where you get plastic or paper, yet some of them allow you to buy some, and the money collected offsets the carbon footprint.

Here in the States, the movement of buying a grocery bag to replace plastic or paper is quite recent and it is therefore no surprise that the American Chemistry Council funded a study that will strike fear in the hearts and minds of young mothers and concerned ignorami.

Researchers from the University of Arizona and Loma Linda University tested 84 reusable shopping bags. Yes 84, don’t ask me why not 100 or 500. It is probably a recessionary thing. YET, what they did find were huge amounts of bacteria in all but one of them.

These findings shouldn’t be a surprise since the researchers also found that 97 percent of reusable bag users never bother to wash the things.
And yes, the one bag free of bacteria coincides with the 3% of grocery bags that get washed on occasion.
The study found coliform bacteria in half the bags, and the potentially deadly E. coli in 12 percent (10 bags) of them.

Since the study was funded by the American Chemistry Council and there is no source that reveals who initiated the study, I am not willing to completely discount ulterior motives. After all they want you to stick to plastic. But on the other hand I wouldn’t be surprised to learn that people never wash their 100 percent recycled shopping bags.
Some just joined the highly fashionable movement and rather buy a reusable grocery bag every week, while committed greenies on the other end of the spectrum are a bit reluctant to dispense laundry soap into the waste waters to wash these bags.

Most people however just don’t think about it, until they have been made aware so often that it becomes an automatic habit.
And that won’t happen until grocery and convenience stores completely stop using paper or plastic, which is as likely going to happen as Detroit quitting to build SUV’s.

These days I frequent the grocery store almost daily on my cycle trip back from the gym at Club 14. I carry a back pack, which comfortably fits my daily 5 or 6 items of need. I buy less and less items that are packed in plastic and the bag boy or girl at Food Lion knows already not to put the stuff in plastic. The items goes straight into my back pack, which gets washed every other week. It’s a routine, just like brushing your teeth. Once you do it for a while, it becomes automatic.