With an $88 million expansion injection OMNI Hotels and Resorts is turning Amelia Island Plantation into its Flagship Resort Property. Convention tourism is targeted. 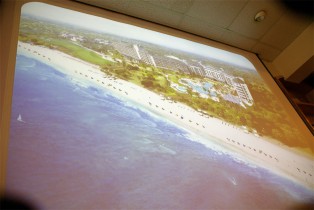 A bit over a year ago TRT Holdings Inc., owner of Omni Hotels & Resorts in Texas, won a bidding battle and bought the famous with bankruptcy courting Amelia Island Plantation for $67.1 million. A sigh of relief was heard across the Island, where some 500-600 residents are employed at the resort. Disaster was avoided, but what’s more, in OMNI the island found a partner with vision and the means to follow through on that vision.

Today, with a ceremony scheduled to be attended by Florida Governor Rick Scott, the resort will begin an $88 million dollar expansion and renewal project that will turn the resort into the OMNI Group’s Flagship Resort.
The entire expansion and renewal includes:
• 155 new guestrooms with 20 suites for a total of 404 ocean view hotel rooms .
• Two new restaurants, including a Bob’s Steak & Chop House, bringing the total on property restaurants to 11.
• 20,000 additional square-foot of meeting space which along with other expansions will increase the conference center to almost 70,000 square feet.
• A consolidated new welcome center to improve and centralize visitor check in. This will be incorporated in a new oceanview lobby overlooking an infinity edge pool through floor to ceiling viewing windows, of course with an focus pointed oceanview bar.
• The Beach Club will furthermore be enhanced with 2 pools, 50% more water and expansive lounge decks that give space to additional food and beverage service points and expanded restroom facilities.
• The addition will add about 100 employees to the current 700 once it’s finished in the Spring of 2013. 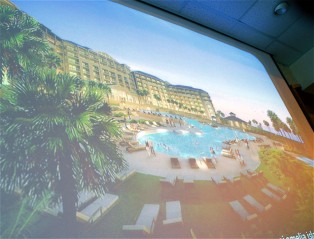 We were privy to a preview by General Manager Tim Digby a couple of weeks ago in City Hall, when he explained that the biggest challenge had been to tighten up the entire resort for the challenges of the future. Deep studies were done on tree preservation, how to better connect the various parts of the resort with better accessibility to the expanded retail village and parking solutions. Looking at the architectural drawing and site plans, OMNI has managed to find some quality solutions for the 1,350 acre resort.

Mr. Digby also revealed that the additions reflect a change in marketing philosophy for the resort.“With the group that was here prior,” he said, “the major emphasis on was social/vacation visitors and less on conventions. “We’re really focusing on the larger conventions.” Digby said the market for vacationers is fickle and highly competitive. It leaves hotels vying to book a room here and there. With conventions, you can book 250 rooms in one shot. The hotel’s target is to fill 70 percent of its rooms with conventions,” he said.

Considering that the total of island’s hotel accommodations are looking at an occupancy rate just other 60%, he just may be right with that objective.

Publisher’s Note: Apologies for the quality of photos as they were taken from the Powerpoint projection in the angle I was sitting to the screen.