One Pot Meals Gain in Popularity

One Pot Meals are making a huge comeback as energy cost goes up and time comes as a premium according to celebrity chefs. 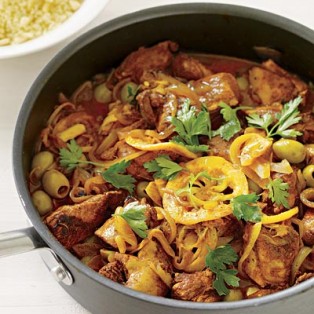 A while back we published a little ebook about how to save on energy cost (Over 150 Tips to help you save on your Utility Bills)and I think I need to get it back into circulation, as everyone by now knows that energy costs will sky-rocket in the near future with consequential price increases of food and about everything else we use, need and want to live our lives.
There was one chapter in the book about how to save in the kitchen with a number of One Pot Meal suggestions that would substantially lower the physical cost of cooking on a stove.
As it turns out, famous chefs are now starting to share (and publish books with) these recipes, while claiming they have been serving One Pot Meal to their families for a long time.

Following story may catch your interest.

If you think of cream of mushroom soup and gooey cheese when you think of one-pot meals, think again. Think seared curried fish with warm olive chutney. Moroccan chicken. Airy egg bakes. Above all else, think of all the different pots you can cook in to get a quick meal on the table and have minimal cleanup when it’s done.
Wok. Slow cooker. Pressure cooker. Dutch oven. Skillet. And yes, even the covered casserole.

“One-pot meals have been around for thousands of years,” Ming Tsai said in a recent phone interview from his office in Wellesley, Mass. “The Chinese have been cooking in woks for thousands of years, and the French have been making cassoulet for hundreds of years.”
In his latest book, “Simply Ming: One-Pot Meals” (Kyle Books, $29.95), Tsai offers recipes that employ one-pot methods from braising to sautéing to roasting and more. And the meals, though they include quality items such as lamb, fish and duck, are economical.
“The majority of meals in the book cost about $20 or less for four,” said Tsai, who is best known for his “East Meets West” and “Simply Ming” television series, but also is the owner of Blue Ginger restaurant in Wellesley.

Like many chefs and home cooks, Tsai believes in the importance of nutritious meals for his children and the sanctity of the family dinner. “This is the way to cook at home, especially if you have kids — a normal household — like me,” he said. “Hopefully, this book can be an aid to get back to family dinners.”
But like many family cooks, he’s got a demanding job, too. He makes it work.
“What I do is I come to the restaurant in the afternoon and get things going, then I leave for an hour or so to go home, cook dinner, and come back in time for service,” Tsai said. “And quite honestly, I cook one-pot meals.”

Many chefs are one-pot meal fans.
“We are the kings of one-pot cooking in this house,” said Ryan Trimm, chef and co-owner of Sweet Grass (who is up for the Food & Wine People’s Choice Best New Chef award; go to foodandwine.com/peoples-best-new-chef to vote. Click on “Southeast.”). His is a two-person household for now, though he and his wife, Sarah, are expecting their first child in May. He’s just practical:
“You cannot believe how much we hate doing dishes. We’ll go so far as to cook one thing in a pan, wipe it out, then cook something else in it.”
The Trimms make a quick stove-top paella, pork chops and rice, and their favorite one-pot dish, kielbasa and sauerkraut.
“It’s my wife’s favorite, and you wouldn’t believe how good it is. My mom used to make it with sauerkraut and the sausage and I always liked it, but when Sarah and I started cooking it together, we starting putting in potatoes, peppers, caraway seeds, beer — it is so good,” he said.

Rick Farmer, who was the chef/owner of Jarrett’s for 14 years and now teaches at L’École Culinaire and does in-home catering and cooking classes, also likes the one-pot method.
“It’s not about the cleanup for me,” he said. “If I’ve got to make a mess, then I’m going to make a mess. I don’t let that stop me when I want to cook something.” He likes the convenience, and like Trimm, he loves his Le Creuset Dutch oven.
“My dad and my mom have both recently had surgery, so I’ve been cooking one-pot meals to take to them all the time,” he said. “All they have to do is heat it when they want it.” He also likes a bamboo steamer, the kind with several layers than you insert in a pan.
“You can stack your meal. Cook some fish in one layer, vegetables in the others,” he said.
He doesn’t often use a wok at home, though. “The average home stove just doesn’t have enough BTUs for a wok. You need a monstrous amount of heat,” he said. “Sometimes I’ll break out my Cajun cooker and use the wok outside.”

“We mostly make this when we’re in Arkansas fishing,” Farmer said. “You brown off your sausage or whatever, maybe some onions, peppers, anything you want, then drain off the grease. Pour in eggs that you’ve whisked, then put the whole thing in the oven at 325 and cook just until the eggs are set, about 25 minutes.”
Tsai loves braises and will often do two at the same time on the weekends.
“I think braised dishes are always better the next day, anyway. So I’ll make two, serve one and save the other,” he said.
A braised dish will take longer to cook, but hands-on time is brief — usually just a bit of cutting and browning — and the smell from the kitchen stimulates appetite and desire.
“You just put it together, then you cook it for about two hours, and you fill your house with a fabulous aroma,” he said. “That’s a secret right there to feeding your kids.”

Looking for some delicious One Pot Meal recipes?

Seared Curried Butterfish with Warm Olive Chutney
4 tbsp. Madras curry powder
1/2 cup rice flour, brown rice flour, or cornstarch
4 (6- to 8-oz.) fillets butterfish, cod, or farm-raised Chilean sea bass
Kosher salt and freshly ground black pepper
4 tbsp. extra-virgin olive oil, plus more for drizzling
3 shallots, minced
1/2 cup mixed olives, pitted and minced
1 large tomato, cut into 1/4 -inch dice
Juice of 1 orange
2 tbsp. chopped cilantro
On a large platter, combine the curry powder and rice flour and mix well. Season the fish with salt and pepper and dredge it on both sides in the flour mixture.
Heat a large, heavy skillet that can be brought to the table over medium-high heat. When the pan is very hot, add 2 tablespoons of the oil and swirl to coat the bottom. When the oil is hot, add the fish. Sauté the fish, turning once, until a paring knife pierces it easily, about 8 minutes. Remove the fish and set aside.
Add the remaining 2 tablespoons olive oil, swirl, and when hot, add the shallots, olives, tomato and orange juice. Heat through, about 2 minutes. Add the cilantro and stir to combine.
Return the fish to the pan, drizzle with oil, and serve. Serves 4.
Source: “Simply Ming One-Pot Meals,” Ming Tsai

Moroccan Chicken
1 chicken, cut in pieces
Salt and pepper, to taste
1 cup Wondra flour, for dredging
2 tbsp. oil, for browning
1 large yellow onion, thinly slices
3 to 4 cloves garlic, thinly sliced
1 (28-oz.) can whole tomatoes, crushed in your hands
1 large zucchini, cut in half moons
1 yellow squash, cut in half moons
2 cups chicken stock
Pinch of saffron (if on hand)
1 tbsp. ground coriander
2 tsp. cumin
1/2 tsp. black pepper
1 cinnamon stick, broken in half
Juice of one lemon
1 tbsp. honey
Season the chicken pieces with salt and pepper, dredge in Wondra and brown on all sides in a Dutch oven. Remove from pan and set aside. Drain most of the grease.
Add the onions to pan and caramelize over medium heat, cooking for about 15 minutes.
Add all remaining ingredients except chicken and stir. Add chicken pieces, stir to coat, and put pan in 350-degree oven, uncovered, for about 30-40 minutes, until chicken is cooked through. Serves 4 to 6.
Note: Serve with Israeli couscous. Before cooking according to label instructions, pour a little olive oil in a pan and toast the couscous with a bit of curry powder and if desired, smoked paprika. Proceed with label instructions to cook.
Source: Rick Farmer