American Legion Post 54 is opening its doors to the public November 5th and 6th with live music by Gary Keniston both evenings. 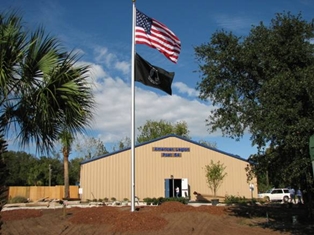 American Legion Post 54 is opening its doors to the public November 5th and 6th with live music by Gary Keniston both evenings. To celebrate the first anniversary of the new building, the Legion wants to invite everyone to come and see the facilities at S. 3rd and Gum Street.

The Sons of the American Legion (SAL) will be cooking chicken and ribs outside on the grill on Saturday November 6th, and a great lunch can be had for a donation of only $10.00 a plate. Come and have lunch after the Veteran’s Day Parade at noon and spend the day remembering those who have served our great country.

Any money donated to American Legion Post 54 goes to great causes. Locally, Post 54 recently donated 14 American flags to Southside Elementary School, $1500 to the Fernandina Beach High School ROTC program, $250 to the Fernandina Beach Babe Ruth League team, and a 6’x10′ trailer to the BSA Venturing Crew #809 which is sponsored by the Legion and the SAL. In addition to these contributions, 300 Halloween Safety coloring books were distributed to local children and 25 students were sent to the Shrine Circus in October.

Working together as a family, the Legionnaires, American Legion Women’s Auxiliary and the SAL will be working on sending 100 welcome home gift bags to the single soldiers of the 3rd Infantry Division returning home from Afghanistan & Iraq.