The rare Lamborghini Miura Roadster, which will be on display at this year's Amelia Island Concours, debuted at the 1968 Brussels auto show.

Amelia Island, FL – The 18th annual Amelia Island Concours d’Elegance announced today that it will celebrate the 50th anniversary of Lamborghini, the glamorous Italian supercar, during the event’s festivities March 8-10, 2013. In support, Lamborghini will bring the rare Miura Roadster from Switzerland for the celebration. The historic roadster will be joined by its contemporary, the Aventador LP 700-4 Roadster, a full class of historic Lamborghinis, as well as a surprise from Lamborghini’s new motorsports team, Squadra Corse.

Ferruccio Lamborghini was a man of the earth and was born under Taurus, the sign of the bull. So it was no surprise when he founded his own line of farm tractors that he chose the fighting bull as his emblem. He loved fast cars and owned everything from an Aston Martin to a Mercedes-Benz Gullwing and, of course, Ferraris. When he became irritated by certain traits of his personal Italian exotic, he directed his workmen to install a new clutch from one of his tractors in the car.

In 1963, Lamborghini took the next step and built his own GT car. He knew precisely the kind of buyer he needed to please: himself. “I want to make a GT car without faults. Not a technical bomb. Very normal. Very conventional. But a perfect car.” Unspoken was the goal to out-Ferrari Ferrari. His first GT, the 350 GTV, had a 3.2 liter twin overhead cam V12 engine where Ferrari had a 3-liter single cam. 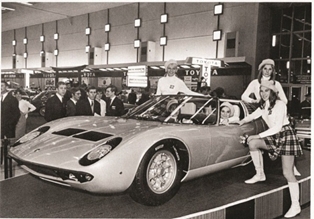 The front engine Lamborghini 350 GTV came first, but the Lamborghini that comes to mind when the cars from Sant’Agata Bolognese are mentioned, is the Miura. Named for an especially ferocious strain of Spanish fighting bull, the Miura made its debut without bodywork at the 1965 Geneva Auto Show. The 4-liter twin-cam 12 was mounted transversely and the advanced P400 (its model number) stole the show. When it was parked in front of the Casino in Monte Carlo during the Grand Prix weekend, alarm bells sounded from Maranello to Stuttgart to Coventry.

The rare Lamborghini Miura Roadster, which will be on display at this year’s Amelia Island Concours, debuted at the 1968 Brussels auto show.