Outrageous Use of Cash for Clunkers

The golf-cart boom has followed an IRS ruling that golf carts qualify for the electric-car credit as long as they are also road worthy. 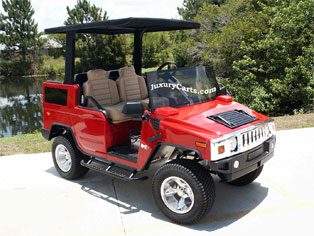 The Cash for Clunkers insanity just escalated to a new high. Listen up Amelia Island, you can get your new golf cart courtesy of Uncle Sam.‚Ä®‚Ä®According to an op-ed in the Wall Street Journal, some are exploiting the federal tax credit of $4,200 to $5,500 awarded for purchasing an electric vehicle, to fund their purchase of golf carts. As long as the golf carts are ‚Äúroad worthy‚Äù – meaning they have side and rearview mirrors and three-point seat belts, they meet the IRS standards.‚Ä®‚Ä®Smart golf cart dealers are going so far as to advertise with slogans like “get a free golf cart.”

‚ÄúWe thought cash for clunkers was the ultimate waste of taxpayer money, but as usual we were too optimistic. Thanks to the federal tax credit to buy high-mileage cars that was part of President Obama’s stimulus plan, Uncle Sam is now paying Americans to buy that great necessity of modern life, the golf cart.
The federal credit provides from $4,200 to $5,500 for the purchase of an electric vehicle, and when it is combined with similar incentive plans in many states the tax credits can pay for nearly the entire cost of a golf cart. Even in states that don’t have their own tax rebate plans, the federal credit is generous enough to pay for half or even two-thirds of the average sticker price of a cart, which is typically in the range of $8,000 to $10,000. “The purchase of some models could be absolutely free,” Roger Gaddis of Ada Electric Cars in Oklahoma said earlier this year. “Is that about the coolest thing you’ve ever heard?”

The golf-cart boom has followed an IRS ruling that golf carts qualify for the electric-car credit as long as they are also road worthy. These qualifying golf carts are essentially the same as normal golf carts save for adding some safety features, such as side and rearview mirrors and three-point seat belts. They typically can go 15 to 25 miles per hour.

In South Carolina, sales of these carts have been soaring as dealerships alert customers to Uncle Sam’s giveaway. “The Golf Cart Man” in the Villages of Lady Lake, Florida is running a banner online ad that declares: “GET A FREE GOLF CART. Or make $2,000 doing absolutely nothing!”

The IRS has also ruled that there’s no limit to how many electric cars an individual can buy, so some enterprising profiteers are stocking up on multiple carts while the federal credit lasts, in order to resell them at a profit later. We should note that some states, such as Oklahoma, have caught on to the giveaway and are debating whether to cancel or limit their state credits. But in Congress they’re still on the driving range.
This golf-cart fiasco perfectly illustrates tax policy in the age of Obama, when politicians dole out credits and loopholes for everything from plug-in cars to fuel efficient appliances, home insulation and vitamins. Democrats then insist that to pay for these absurdities they have no choice but to raise tax rates on other things‚Äîlike work and investment‚Äîthat aren’t politically in vogue. If this keeps up, it’ll soon make more sense to retire and play golf than work for living.‚Äù