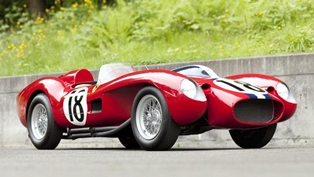 Santa Monica, CA – Gooding & Company, the official auction house of the Pebble Beach Concours d’Elegance, is delighted to announce that two legendary sports racing stars, the 1957 Ferrari 250 Testa Rossa Prototype and the 1963 Shelby Cobra 289 Factory Team Car, will be presented at auction for the first time in history at the world-renowned Pebble Beach Auctions on August 20 & 21. Since its inception, the Pebble Beach Auction has welcomed significant and rare cars and now with these exciting additions, the star-studded 2011 Pebble Beach Auctions will once again be the world’s premier stage for the collector car market.

“Being in the presence of the 1957 Ferrari Testa Rossa Prototype is a visceral and breathtaking experience unlike anything I’ve ever known,” says David Gooding, President and founder of Gooding & Company. “We will all witness a historic day when this incredible car – one of the greatest race cars of all time – crosses our stage in Pebble Beach this August.”

While it exists in a class of its own, the 1957 Ferrari 250 Testa Rossa Prototype joins an elite list of extraordinary competition Ferraris that have crossed the block at Gooding & Company’s auctions, including the record-breaking 1959 Ferrari 250 GT LWB California Spider that sold for $7.26 Million and the 1961 Ferrari 250 GT SWB Berlinetta SEFAC Hot Rod that sold for $6.105 Million last year.

The 1957 Ferrari 250 Testa Rossa Prototype, Chassis 0666 TR started it all as the prototype and test-bed for the Testa Rossa line, which is arguably the most successful series of sports racing cars in history. Based on the 290MM, the prototype TR was assembled in 1957 featuring the classic V12 engine, de Dion rear axle and right-hand drive. The car debuted at the Nurburgring 1000kms where Masten Gregory and Olindo Morolli finished in 10th place. As a factory team car, 0666 TR practiced in Sweden and ran the GP of Sweden. After receiving pontoon-fender coachwork by Scaglietti, Ferrari campaigned the car in the Venezuelan Grand Prixand the 1000kms of Buenos Aires, where it placed an impressive 3rd and 2nd, respectively. It has been raced at all of the major events worldwide including Sebring, Nurburgring and Le Mans, as well as SCCA events. Restored to superb condition with its original, matching-numbers engine and 1958 NART livery, the wildly impressive historic racer has won two Best in Class trophies from Pebble Beach, a Platinum Award and the TR Cup at Cavallino, and it is one of only two factory Classiche-certified TRs in existence. With just two owners in 40 years, this car’s presentation at auction this August is a once in a lifetime opportunity. If this Testa Rossa sells next month, it will be the most valuable car ever sold at auction in the world.

“Leading Shelby American in one of its most successful racing periods ever, the 1963 Shelby Cobra 289 Factory car is undoubtedly one of the most significant cars in American motorsport history,” says David Gooding. 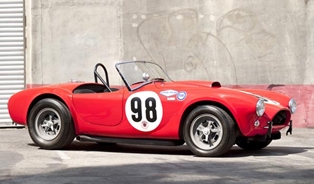 Completed in May 1963, CSX2129 was built by Shelby to full ‘Sebring’ specification as a Factory Team Car. In what would become an unprecedented year for Shelby, CSX2129 competed through the 1963 USSRC season at the hand of Bob Bondurant and, predominantly, Ken Miles. Numerous class victories and pole positions marked CSX2129’s successful 1963 season playing a major role in Shelby America’s win of the USRRC Manufacturer’s Championship, USRRC Driver’s Championship and an SCCA Championship. Successfully raced by Graham Shaw in 1964, the 289 team car returned to Shelby and was displayed at the 1964 New York World’s Fair. Now fashionable in its authentic 1963 team livery, this American motorsport legend has an estimate of $2.4 million – $2.8 million and will be an exciting highlight of Gooding & Company’s Pebble Beach Auctions.