Are weather satellites soon reaching the end of their life cycles and will we be without guidance when serious weather systems come our way? 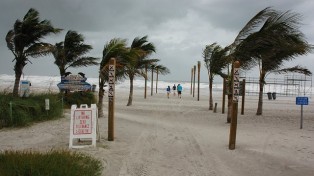 Hurricane Sandy passes Coca Beach to our South 300 miles out

Mixed in to the prognostications of where exactly Hurricane Sandy and the pre-season winter storm coming east will meet to give birth to a potentially devastating Frankenstorm next week, there is another conversation brewing about weather satellites soon reaching the end of their life cycles and we may be without guidance on weather systems in the near future.

Now we have all learned on dozens if not hundreds of occasions in recent decades that “authorities” can only claim and execute the powers that go hand in hand with words like “officials” and authorities”, after a crisis emergency of some order has been declared.

In other words, long term responsible planning is not a strength of short term politics. Besides the continued warnings we receive about our 100 year old plus water distribution system that leaks more potable water than we consume and a potential power grid collapse that even worries the smarter tier of politicians, nothing will change the culture that prefers short term crisis over long term planning.

But wait…there is more. Not only are we ignoring our weather satellites, water distribution systems and power grids, we have also abandoned the space shuttle program that would allow us to install, repair, monitor the satellites that we depend on for communication, defense and weather. How exceptionally stupid are we to let politicians spend $2 Billion for irritating campaign ads this year, but spending for infrastructure is a major neglect… a surefire way back to third world status.

Planned management instead of crisis management makes the important priority distinctions. In the case of the weather satellites, fine tuning weather forecasting beyond an already adequate base is fine, if sufficient means are available. If not, than I would like to see someone seriously tackle the problem of electrical outages caused by the slightest windstorm. I would like to see funding allocated to put a new power structure underground. Yes it is costly, but not as costly as ignoring the problem over the long haul. Millions of people are affected by this problem on the Eastern Seaboard and having a satellite tell me it’s about to happen is no substitute for it not happening.

Instead of eliminating the power outage and surge issues we experience on a far too regular basis here on Amelia Island, we get a letter from the power company inviting us to sign up for a Surge Shield protection service to protect our appliances and computers at a cost of $9.95 a month. What a racket! Before moving to the island I lived on the Caribbean Island of St.Martin, which had all powerlines above ground as here. After Hurricane Luis hit in 1995 and wiped out power for 6 weeks, the Dutch (the island is part of the Kingdom of the Netherlands) came in and put all power underground. Yes it was expensive, but now 17 years later the island is the first one to welcome tourists after a hurricane hits the area, while all the other destinations still scramble weeks or months later. A power grid underground is an economic investment not a wasteful expense that adds to the national debt.

Here in the US we have been so focused on threats from terrorism since 9/11, that we’ve forgotten to look after ourselves in much more fundamental ways. Electrical grid in the northeast? Bailing wire and chewing gum. Roads, bridges, sewer systems, internet, educational system, our own government? We’d rather send troops, bombs, and drones to pursue desperate people in third world countries than take care of business here at home.

And before I’m getting a mile long stretch of comments that would like to politicize this story, let me warn you, this has nothing to do with Republicans vs Democrats. Almost every government project ends up like this, it’s the Washington culture. The military’s satellite acquisition program is a god-awful mess of fraud, waste, abuse, and horrific project management, and they have nearly limitless resources. I’d suggest outsourcing, but Congress would just give the program to Boeing or Lockheed and we’d be in the same position.

Of course, when push really comes to shove we can do without microchips, computers, cell phones, computer systems for automobiles and other vehicles; not to mention household appliances, climate control systems, security systems, etc. I know, I have been through the aftermath of 7 major hurricanes (Cat 4 and 5). None of the above matters in the destruction created by a major hurricane.

Is there anyone who cares if the Sahara desert gets hit by massive storms without adequate warning? or icebergs the size of Delaware are breaking loose from the Arctics? or, if terrorist activities go undetected until it is too late to prepare. Many “conveniences” and life saving treatments these days are the result of this so-called useless space technology. Many call it a wasteful expense…that is, until you need it.

As a lifelong sailor I know that long before meteorologists had sophisticated technology and satellites to help them predict the weather, people made forecasts based on historic observations of the sky, animals, and nature, just like before we were spoiled by GPS systems, we navigated the oceans by Polaris, the Pole Star in the Northern Hemisphere and the Southern Cross in the Southern Hemisphere. Don’t get me wrong. I love the ease brought on by science and technology, but I also know that it is a gift, not an entitlement. That’s why I don’t forget that many of the traditional weather observations used are accurate. Maybe if all else fails, we may need go back to them, even if it’s only temporary.

1. The higher the clouds, the finer the weather. If you spot wispy, thin clouds up where jets fly, expect pleasant weather. Keep an eye, however, on the smaller puff clouds (cumulus), especially if it’s in the morning or early afternoon. If the rounded tops of these clouds, which have flat bases, grow higher than the one cloud’s width, then there’s a chance of a thunderstorm forming.

2. When clouds appear like towers, the Earth is refreshed by frequent showers. When you see large, white clouds that look like cauliflower or castles in the sky, there is probably lots of dynamic weather going on inside. Innocent clouds look like billowy cotton, not towers. If the clouds start to swell and take on a gray tint, they’re probably turn into thunderstorms.

3. Red sky at night, sailors delight. Red sky in morning, sailors take warning.  A reddish sunset means that the air is dusty and dry. Since weather in North American latitudes usually moves from west to east, a red sky at sunset means dry weather—good for sailing—is moving east. Conversely, a reddish sunrise means that dry air from the west has already passed over us on their way easy, clearing the way for a storm to move in.

I could be me, but I’d rather be prepared and plan for what is ahead of me, than depend on any government’s crisis management storybook or track record.