Sailing across the Pacific from San Francisco to Sydney on a yacht built out of recycled plastic bottles using only sails, wind and solar energy, seems like a perfect adventure for 2010. 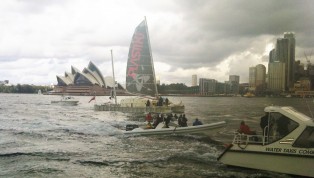 The Plastiki sailed into Sydney Harbour around noon on July 26, 2010

Remember my story in January about the sailing yacht Plastiki built out of 12,500 plastic bottles and its crew’s intention to cross the Pacific from San Francisco to Sydney Australia.

Well they arrived yesterday around noon at the intended destination. The Plastiki crew was met by a welcome flotilla of boats and helicopters as they sailed through Sydney harbour on their way to Sydney’s Australian National Maritime Museum where the arrival ceremony was held in front of a bustling audience of friends, families, press and supporters. The Plastiki arrived safely on July 26th around midday after an epic voyage which has taken them through the Pacific Ocean on an 8,300 nautical mile adventure lasting over 129 days since it set sail in San Francisco on March 20.

Go to the website for an exciting story of adventure and commitment about sustainability http://www.theplastiki.com/