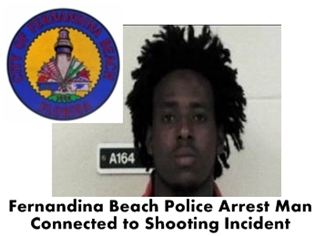 Fernandina Beach, FL – The Fernandina Beach Police Department has announced the arrest of one individual in connection with a shooting incident that occurred on June 12th at the intersection of Vernon and Hickory Streets.

Detectives have charged Joshua M. Thomas, 22 years of age of Fernandina Beach, with possession of a firearm by a convicted felon. Additional charges in this case are pending.

Detectives believe that Thomas was involved in a previous altercation with the shooting victim, Laquavious Hooper. A second confrontation involved handguns, with shots being fired by Hooper at Thomas, who then returned fire, striking Hooper twice.

Thomas was not injured during the confrontation and fled the area. The victim was transported to Jacksonville by Air Ambulance with life threatening injuries and remains in critical condition at Shands Hospital in Jacksonville.