Porsche Winner to Appear at the Amelia Concours 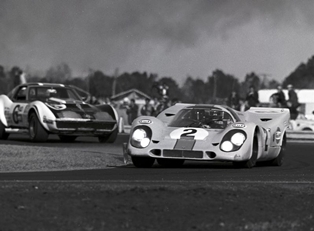 The Porsche 917K that won a lopsided victory in the 1970 24 Hours of Daytona will appear at the 17th Annual Amelia Island Concours d’Elegance as part of the salute honoring the Daytona 24 Hours’ 50th anniversary.

Driven by Pedro Rodriguez, Finland’s Leo Kinnunen and 2000 Amelia Concours Honoree Brian Redman, the #2 917K Gulf Porsche dominated the first round of the 1970 International Championship of Makes winning Daytona by 45 laps – more than 171 miles! Redman was installed in the leading #2 Porsche while the 917K he shared with Swiss sports car and Formula 1 ace Jo Siffert had transmission repairs.

“They had trouble communicating with Leo Kinnunen, who didn’t speak much English,” Said Redman later, “They couldn’t make him understand that he should slow down… because they had a good lead.”

Rodriguez and Kinnunen went on to win three more World Championship races in 1970. With wins in every round of the 1970 championship season, except the 12 Hours of Sebring, Porsche won an equally lopsided championship victory over arch rival Ferrari.

The 1970 Daytona winner did not race again and was modified to Interseries specification as an open cockpit “spyder” in 1971. Kinnunen was reunited with his modified Daytona winner and raced it to the 1971 Interseries Championship. Kinnunen went on to win the Interseries Championship for three consecutive years. The 1970 Daytona 24 Hour winner was restored to Daytona-winning specification and still competes in high profile vintage and historic car races driven by its owner, Bruce Canepa of Scotts Valley, California.

His book “the Racers” brings together a portfolio of award-winning photographer, Al Satterwhite’s, stunning black & white photographs of the most exciting decade of racing. From 1963-1973 the Daytona 24-Hour and Sebring 12-Hour races represented a time of profound change in racing as cars reached unheard of speeds, while advances in handling and aerodynamics forever changed the course of racing.

Al captured it all with his keen eye for action and composition and brings it to you in this exclusive collector’s limited edition book. You’ll get an intimate, never published before’ glimpse behind the scenes of drivers, action in the pits and on the circuit. Al’s work is exhibited in galleries and museums worldwide, and has been published in magazines such as Sports Illustrated, Life, Look, Time, Newsweek, and Playboy.

Now in its second decade, The Amelia Island Concours d’Elegance is among the top automotive events in the world. Always held the second full weekend in March, “The Amelia” draws nearly 250 rare vehicles from collections around the world to The Golf Club of Amelia Island at Summer Beach and The Ritz-Carlton, Amelia Island for a celebration of the automobile like no other. Since 1996, the show’s Foundation has donated nearly $1.8 million to Community Hospice of Northeast Florida, Inc. and other deserving charities on Florida’s First Coast. The 17th annual Amelia Island Concours d’Elegance is scheduled for March 9-11, 2012.