Rare and Classic Cars are Heading for Amelia Island 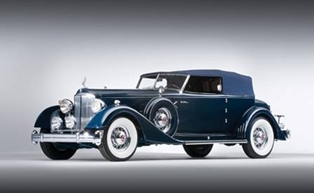 Returning to the prestigious Ritz-Carlton Hotel, the well-established sale – now in its 14th year – will present a magnificent roster of 100 blue-chip automobiles as it looks to build upon RM’s strong track record in Northeast Florida. In 2011, the company once again enjoyed the top auction results posted during the Amelia Island Concours weekend, generating a remarkable $24.3 million in sales with a superb 96% of lots sold – the highest tally ever achieved during the event’s history. The 2012 event promises to continue the momentum with a stellar list of early entries, including a handsome 1934 Packard Twelve Dietrich Convertible Victoria (pictured top) and a stunning 1929 Cord L-29 Hayes Coupe. Both are considered the ultimate in Classic Era design, rarity and desirability.

“The Amelia Island Concours d’Elegance weekend is a world-class celebration of automotive styling through the years,” says Rob Myers, Chairman & Founder, RM Auctions. “We are delighted to be an official part of the weekend once again and look forward to bringing another impressive catalogue of high-caliber motor cars to our Amelia Island auction stage.”

Regarded by many as the ultimate Classic Packard, the 1934 Packard Twelve Convertible Victoria, chassis number 1108-15, is expected to garner serious attention from discerning enthusiasts. In many ways, the Packard Twelve was the signature car of the Classic Era – the top-of-the-line offering from one of America’s leading manufacturers. The example on offer represents the most desirable model year and is one of as few as two known surviving examples featuring the perfect combination of supremely desirable custom Dietrich coachwork in this style on a powerful Packard 12-cylinder chassis. Boasting an excellent provenance and well-documented history, it has benefitted from the care of several notable collectors over the years. In addition, it is a proven touring car – its excellent driving dynamics confirmed during a 1700-mile tour from Seattle, Washington, to Pebble Beach, California. Completing its status as the ultimate Classic Packard, its beautiful restoration was recognized via “Best in Class” honors at the 2011 Concours d’Elegance of America at St. John’s in Michigan (Estimate available upon request).

“This Packard ticks all the boxes when it comes to desirability – unique styling cues, excellent provenance, superb presentation and capability for extended touring. It is arguably one of the finest, rarest and most inspired automotive masterpieces of the Classic Era, deserving of close inspection,” adds Myers. 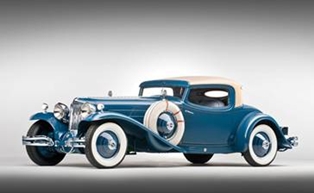 Another outstanding example of Classic Era styling set for RM’s Amelia Island auction podium is a stunning, one-off 1929 Cord L-29 Hayes Coupe, chassis 2927005, widely recognized as the most significant L-29 in existence. Designed by Count Alexis de Sakhnoffsky and built by Michigan’s Hayes Body Corporation on the revolutionary front-drive Cord L-29 chassis, this “one-off” design statement was conceived and built specifically for international show competition. No stranger to the show field, it enjoyed stunning results at the 1930 Paris, Monte Carlo and Beaulieu Concours d’Elegance events, where it secured its place in the history books as the first American entry to win at all three venues. Its stunning looks have continued to fascinate onlookers over the years, with additional accolades received at the 1987 Pebble Beach Concours d’Elegance, and more recently, “Best in Class” honors at the 2008 Meadow Brook Concours d’Elegance. Beyond its success on the show field, it also holds its ACD Category 1 Original Certification and boasts a known, well-documented provenance, including 50 years of careful single ownership (Est. $1,250,000 – $1,500,000).

Reflecting the international flavor of consignments for the RM Amelia Island sale, additional highlights include:

For those unable to attend the event in person, Internet, absentee and telephone bidding options are available and the auction will stream live online at www.rmauctions.com to provide real-time coverage of the event.