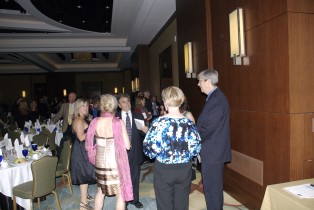 An amazing 510 tickets were sold for the Annual Boys and Girls Club Dinner at the Ritz Carlton, Amelia Island last night, filling up the ballroom to capacity and resulting in $10,000 more collected from the silent auctions than last year, when the plans were unveiled for the new Fernandina Beach home for the Club on Lime Street.
More good news came with the announcement that of the $1.8 million needed for the construction and outfitting, $1.728 had been collected leaving only a $72,000 gap.
The new facility, which started construction last month is scheduled to be finished by September and last night’s grand stand support will have without any doubt collected the financial balance needed.

The dinner, orchestrated, designed and supervised by Ritz Carlton, Amelia Island’s Executive Chef Thomas Tolxdorf, was superb, and a tribute to his Farm to Table philosophy. The Romaine Lettuce Salad was easily the best tasting Romaine I’ve ever had and could have turned me into a vegan if not for the main course of Roasted Breast of Chicken and Garlic Shrimp. At the risk of sounding a bit blasé I have to admit that as a aficionado of Key Lime Pie, the Key Lime Tart served for dessert tasted so fresh that Key West’s own “Blonde Giraffe” brand pales by comparison. 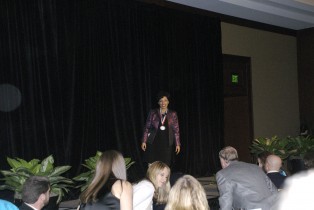 After Club President Bill Gower made announcements of gratitude and recognition, especially highlighting the wonderful efforts from Mrs. Ann Moser on behalf of the Club, it was the turn of honor guest motivational speaker Bonnie St.John, who treated the audience to a wonderful story of her life, from poverty and physical and racial challenges in San Diego to becoming a Special Ski Olympics Silver Medal Winner, who had found strength for her journey through life from her mother, her ski instructor and the magnificent support she received from the Boys and Girls Club when she needed it the most.
Heart warming and inspiring with a message of perseverance and the motivational recognition that Gold Medals go to those people who get up faster than anyone else after being knocked down.

With deep gratitude to our host Ange Wallace of the Travel Agency, a lifelong supporter of the Boys and Girls Club, we felt once again the humbling joy of being part of this wonderful, giving  community.