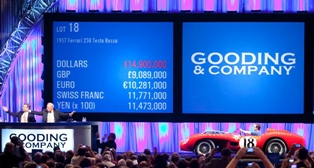 Pebble Beach, CA – Gooding & Company, the official auction house of the Pebble Beach Concours d’Elegance, made history last night selling the iconic 1957 Ferrari 250 Testa Rossa Prototype for an outstanding $16.39 million. Recognized the world over for its historical significance and stunning design, the auction of the Scaglietti-bodied, pontoon-fendered Prototype mesmerized thousands of people in the Pebble Beach auction room as well as around the world via Gooding & Company’s live webcast and twitter conversation #2011PebbleBeachAuctions. Energized with excitement after the Testa Rossa arrived on stage with a thunderous engine growl, the crowd cheered when Auctioneer Charlie Ross accepted the commanding first bid of $10 million. As the audience watched in amazement, both Charlie Ross and David Gooding entertained the steadily-escalating bids that soared past major benchmarks of $12 million, $13 million and $14 million. When the gavel finally dropped, there was a roar of enthusiasm confirming Gooding & Company’s outstanding $16.39 million world record achievement.

Setting the tone for an outstanding start to its two-night Pebble Beach Auction, Gooding & Company’s top ten final results from the first day are as follows: