Amelia Island has great parks and great beaches; soon we will have good multi-use trails to connect them. 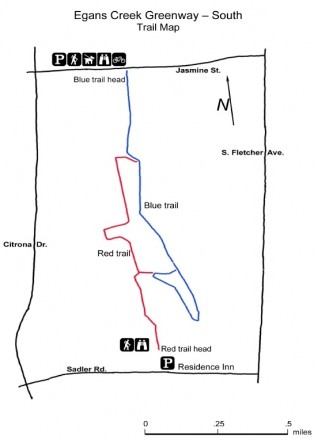 How are we doing on local recreation quality?

The following is an update on progress that is being made:

Greenway and Fort Clinch
Last year the City of Fernandina Beach opened a new pedestrian and bicycle bridge from Sadler Rd. to the Greenway. This allows access to a 2 mile dirt trail that exits from the Greenway at Atlantic Ave. Across Atlantic is the entrance to Fort Clinch which has 3 miles of paved park roads and 3 miles of dirt paths that can be used for walking, running or bicycling. Both are beautiful places to enjoy a walk, run or ride.

AIA Island Bike Lanes
Ten miles of bike lanes along A1A from Main Beach to the bridge across the Nassau River are almost finished. The Florida Department of Transportation (FDOT) expects the road resurfacing project, with new bike lanes, will be finished before the end of March. This will be just in time for the 4/16/11 Katie Ride for Life event, which expects over 700 bicycle riders this year.

Sidewalks to Island Schools
An AIT team recently helped to obtain an FDOT Safe Routes to School grant for a sidewalk to Emma Love Grammar School, as part of the AIT. FDOT will ask that bids on this project be submitted by March 2012 and it is expected to be constructed next year. The AIT is planning to help the Southside elementary school apply, by 3/31/11, for a safe routes to school grant for a sidewalk for Lime St., where the Boys and Girls Club will be building a new clubhouse.

AIT Off-Road Path along A1A
FDOT plans to build an off-road multi-use path about 6 miles long (12 ft. wide on the east side of A1A) from the Nassau River bridge to Peters Point. This is now planned for 2012-2013 construction instead of 2013-2014, a pull up of one year. FDOT construction will use the Federal Grant money our AIT Project Team applied for in 2005. We believe this off-road path will significantly add to the safety and enjoyment of riding a bicycle, and the path can also be used by walkers and runners.

East Coast Greenway (ECG) Designation for AIT
AIT Team recently received approval for ECG designation of the Amelia Island A1A bike route, (once the new bike lanes are completed) from the Fernandina Beach Marina to the south-end of the island at the Nassau River bridge. The Amelia Island Trail Project Team will purchase ECG trail signs and FDOT has approved them being posted on the FDOT bike lane posts.

Tourist Development Council – AIT Brochure and Websites
The Tourist Development Council (TDC) is working on an Amelia Island Trail (AIT) brochure, planned for spring of this year, in line with the new bike lane construction completion and ECG designation. The TDC will also put the AIT trail on the Amelia Island website, the state of Florida “Visit Florida” new Trail website, and the national ECG trail website to inform tourists. The AIT maps are available now at www.ameliaislandassociation.com.

Fernandina Beach – Bicycle Friendly Application
AIT has worked with the City of Fernandina Beach to prepare and submit a bicycle friendly community application for assessment by the League of American Bicyclists in order to get feedback on opportunities for improvement. The City Commission approved this application on 1/4/11. The assessment will be done later this year.

Amelia Island has great parks and great beaches; soon we will have good multi-use trails to connect them. There is still much more to do, so please support our efforts to make Amelia Island more bicycle friendly.

Recreation quality is not just measured by the facilities we have, but also by the use we make of them. Spring is near, so get ready to walk, run or bike somewhere.