Rendezvous at Sheffield’s for Movies on Thursday Nights

Rendezvous Festival, Sheffields at the Palace

With the recent closing of the Carmike Cinema 7 on Amelia Island, this is a great way to satisfy your movie cravings! 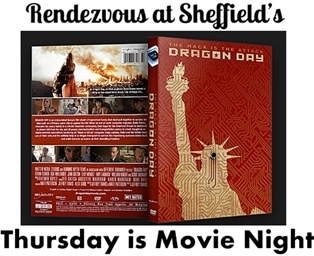 Rendezvous Festival has teamed up with Sheffield’s at the Palace creating a Movie House on Thursday evenings leading up to this movie, music and gaming festival coming to Northeast Florida in June. With the recent closing of the Carmike Cinema 7 on Amelia Island, this is a great way to satisfy your movie cravings!

The Movie House officially opens on January 29th featuring the film Dragon Day, where a family getaway to a mountain town turns deadly when China launches a massive cyberattack against the USA, forcing former NSA Engineer Duke Evans to fight to save his wife and daughter in the New World Order.

Upcoming movies include the 2013 Outstanding Achievement Award Winner at the Williamsburg International Film Festival, The Heroes of Arvine Place, on February 5th; Academy Award Winner Luke Matheny’s newest film, The Birder’s Guide to Everything on February 12th and Hide Your Smiling Faces, a film that has earned a variety of awards and nominations, showing on February 19th.

A new movie will be featured at Sheffield’s every Thursday night until the Rendezvous Festival opens on June 5, 2015. The doors open at 6:30, and the movie screenings start at 7:00 PM. Tickets are only $10.00 and include a bag of popcorn. Hola! Cuban Café’s menu is available for order, and there is a cash bar.

Located in American Beach, Evans Rendezvous was a music club that once hosted famed musicians such as Louis Armstrong, James Brown, Billie Daniels, and Ray Charles in the 1930’s, 40’s, and 50’s. In 1964, the Rendezvous was hit hard by Hurricane Dora and everything was destroyed. The Rendezvous Festival is all about entertainment and brings artists and the community together for a nine day event.