Fire Damage to the Fernandina Beach structure was heavy with a total loss estimate of one hundred thousand dollars. 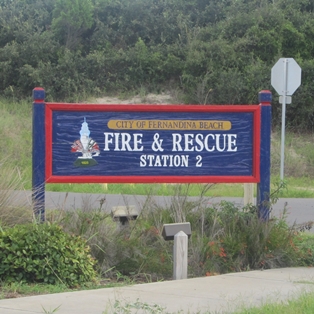 Fernandina Beach, FL – Friday, August 24, 2011 at 1125 hours, the Fernandina Beach Fire-Rescue Department was dispatched to a residential structure fire at 2115 Florida Avenue. The initial report from Nassau County Dispatch was that the caller stated there was heavy black smoke coming from inside the residence.

At 1130 hours, Fire-Rescue Crews arrived on scene and reported that smoke and flames were visible coming from the front and sides of the one story single family residence. Firefighters pulled hose lines from Engine 102, entered the three bedroom home conducting a search to confirm reports that all occupants had evacuated the home, while attack crews extinguished the fire. Fire damage to the residence was heavy, consisting of heat, smoke and water damage. It took 14 (fourteen) Firefighters approximately 15 (fifteen) minutes to bring the fire under control.

Fire Damage to the structure was heavy with a total loss estimate of one hundred thousand dollars. No injuries were reported as a result of the fire; however, Fire-Rescue crews evaluated two patients while on the scene. The two were later released without transport to the hospital. The American Red Cross was notified and met with the occupants on scene to offer assistance after their loss. At this time the cause of the fire is still under investigation.