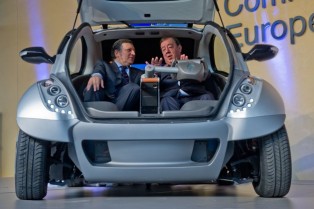 Looks pretty comfortable for a fold up car!

In the mid 1960s the idea of publicly owned bicycles was first introduced in the city of Amsterdam. Although the idea was attractive in fighting inner city air pollution, promoting inner city short term transportation options and congestion solutions, it took several decades before the idea to become feasible and effective in terms of numbers and operational efficiency. In many European cities and Nature Parks these days there are fleets of bicycles in a short term bicycle rental program in operation, usually secured by a Credit Card release system.

Segway, the funny two wheeler invention, teamed up several years ago with GM to create Puma, a one/or two person two-wheeled city vehicle capable of reaching speeds up to 35 miles per hour, and going 35 miles on a single charge at a cost of 35 cents per charge.

Now following the same philosophy, a group of companies in Spain has now produced a tiny revolutionary fold-up car designed in Spain’s Basque country, as the answer to urban stress and pollution. Different however this time is that the idea for this 5 foot long vehicle (think small dining room table) originated in the US. Usually European ideas are developed in America, but this time it was dreamt up by Boston’s MIT Media Lab and conceptualized and developed by a consortium of seven small Basque firms under the name Hiriko Driving Mobility. 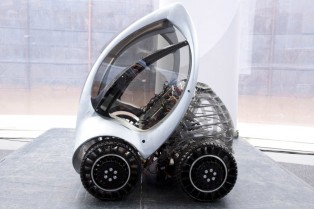 The “Hiriko,” the Basque word for “urban,” is an electric two-seater with no doors whose motor is located in the wheels and which folds up like a child’s collapsible buggy, or stroller, practically guaranteeing easy parking everywhere. Also, the vehicle’s four wheels turn at right angles to facilitate sideways parking in tight spaces.
The Hiriko can run 120 kilometers (75 miles) without a recharge and its speed can be electronically set to respect a variety of city limits.

Besides the functionality of the car what’s however real “interesting” here, is that the makers see the operation of the Hiriko as city-owned vehicles, up for hire like the fleets of bicycles available in many European cities. In a PR effort, the backers of the project describe the “Hiriko” as a “European social innovation initiative offering a systematic solution to major societal challenges: urban transportation, pollution and job creation.”

And that my friends is of course a bit frightening, as it implies another step towards ever expanding government control. With a Euro 12,500 price tag per vehicle, considering the pitiful track record of governments efficiently running any type of program, a financial disaster at some point in the future is a given.
Despite track records of  mismanagement and budget overruns, quite an impressive number of cities have shows interest, including Berlin, Barcelona, San Francisco and Hong Kong. Talks are under way with Paris, London, Boston, Dubai and Brussels.
Malmo in Sweden has already signed up to a trial Hiriko program with Berlin, Barcelona, Vitoria-Gasteiz (the second largest Basque city), San Francisco, and Hong Kong expected to follow suit.

Wonder if our city leaders on Amelia Island would consider the Hiriko?