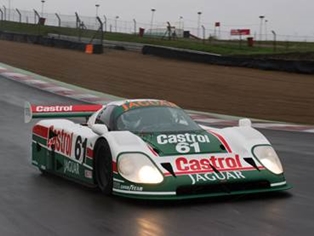 Blenheim, Ontario – RM Auctions, the official auction house of the Amelia Island Concours d’Elegance, is delighted to announce it has secured one of the most historic sports prototype racing cars of the modern era – the Works Jaguar XJR-9, chassis 388, which won the Daytona 24 hours in 1990. Poised to cross the auction podium at RM’s highly anticipated Amelia Island sale, March 14, #388 is the third of just three cars constructed for the 1988 IMSA GT Championship, run by Tom Walkinshaw Racing (TWR), and the only remaining example of just two XJR-9 chassis ever manufactured as purpose-built IMSA specification cars.

Prior to its most famous victory in 1990, #388 enjoyed two highly successful seasons in 1988 and 1989. In 1988, predominantly in the hands of Davey Jones and Jan Lammers, the car achieved four podium finishes and never finished a race outside of the top seven, a superb achievement that helped the Jaguar team secure third place in the IMSA constructor’s championship, stamping its authority in both IMSA and Group C racing.

During the 1989 season, #388 was an equally strong contender, achieving three front-row starts including a pole position, four second-row starts and eight overall podium finishes. The ’89 season saw Price Cobb and John Nielsen join the car’s driver roster, leading it to a remarkable record that saw it finish on the podium for two-thirds of all the races it competed in.

By the start of 1990 season, #388 was fully developed into XJR-12 specification and went on to famously win the season’s headline event, the 24 hours of Daytona, in the hands of Davey Jones, Jan Lammers and Andy Wallace. The victory was an unquestionable high point in Jaguar’s illustrious endurance racing history, especially after having finished second overall with this car at Daytona in 1989. #388 also secured a podium finish at Sebring in 1990.

“We’re thrilled to have been entrusted with the Works Jaguar XJR-9 for our Amelia Island sale. Its offering is made all the more special given 2015 marks the 25th anniversary of its win at Daytona,” says Max Girardo, Managing Director, RM Auctions Europe. “It is a true work of art that effortlessly blends great design and engineering with incredible performance. The lines are fantastic – it appears fast even when standing still – and then there’s the massive V-12 engine that can help propel it to a blistering 240 mph. Despite all this, it is not an intimidating car. Having driven it recently, I can attest that it is a delight to drive and easy to handle.”

A short video highlighting the car with commentary from Max Girardo and Martin Brundle, TWR Jaguar Driver can be seen below:

The historic Works XJR-9 Jaguar will lead an exceptional roster of more than 80 handpicked automobiles at RM’s Amelia Island auction. Celebrating its 17th year as the official auction house of the Amelia Island Concours d’Elegance in 2015, the RM sale returns to the prestigious Ritz-Carlton, March 14. For further event details, including a frequently updated list of entries, please visit www.rmauctions.com or call toll-free 800.211.4371 (1 519 352 4575 outside North America).