russian spy and I

I think we should spy on the Russian Space program and find out why they can fly space station trips at half our cost. 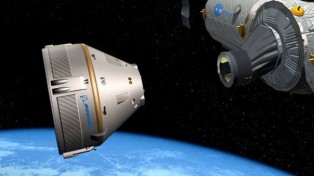 Helping to pave the road for the future of commercial spaceflight, Boeing is hard at work on the research and development of a new space capsule aimed at flying people to the International Space Station.

When I heard and read the story about 11 people in Boston, New York and Washington being arrested by the FBI for spying for the Russian Federation, I had flashbacks of the 1960s and the heydays of the Cold War.

Other thoughts that fought for immediate attention in my brains were: Better the Russians, than the Taliban or bin Laden; so what’s going to happen to the Space Station now that the Shuttle Program has almost reached its end; should I check out my neighbors? He looks Russian and she is way too friendly when I get my mail from the mailbox.

The number of casualties was infinitely smaller on both sides and we each knew our “enemy”. Of course it could be that reminiscing about the Cold War is embedded in “good old day nostalgia”, but even the Olympic Games were more interesting as it embodied the peaceful version of “war”. Think about all the movies Hollywood gave us and how many Movie Stars built their careers on Moscow versus Wahsington.
I bet you that with the FBI releasing their investigation in Cloak and Dagger style rhetoric, even Arnold Schwarzenegger may decide to become an action hero again after leaving California’s Governor seat in November.
Reportedly one spy is a 28-year-old divorcee with a masters in economics, an online real-estate business, a fancy Financial District apartment and a Victoria’s Secret body. According to the New York Post, she had been passing information to a Russian government  official every Wednesday since January. Now tell me wouldn’t that whet your appetite more than yet another story about boring bin Laden antics?

Of course there is much more to the picture of a changed world in 2010, where Obama and Russian Federation President Medvedev met over Cheeseburgers and fries last week in Canada, discussing a new round of Russian-USA relationships.
And how about the administration’s decision to cancel our space shuttle program and instead hitching rides to and from the space station with our good friends, the Russians.  OK, so far maybe it doesn’t seem too out of place.  Our shuttles are getting old and it would cost a tremendous amount of money to design and build new ones, not to mention all the cost over runs that are always associated with any massive government project.

What is it costing us right now to go to the space station on our own shuttles?  Well about $450 million.
Of course we own the vehicle and we can fill all the seats if we choose and still that surely seems like a lot of cash for a ride to the station and back, doesn’t it?  Well, perhaps our elected leaders have figured out a way to save us, you and I, some money by outsourcing this service, after all, this is no different from what many U.S company’s have done in sending their jobs overseas, right? They are saving big time and pass these savings on to you and me. Right?

So just how much will we save by “farming” out our space transportation service?  Our (former) good friends, the Russians are only going to charge us $55.8 million for a round trip ticket, that would be “per person.” It’s time to break out the old calculator and multiply this by an average passenger list of 4, (the other 3 are shuttle crew). We are now going to pay the Russians $223.2 million to do the same job and save about $225 million in the process. Great decision to outsource I would say, but what happens now that the FBI has discovered that Russians are still spying on us? Aerospacial technology has probably some of the most sought after secrets in the world today, considering that Space is the Next Frontier to conquer?

But not to worry fellow Americans. Boeing is already building a Space Shuttle Replacement and reports to be far ahead of a 2016 delivery schedule. Of course they still have to figure out which rocket system to use to propel the shuttle into space, but a quick calculation tells me that at 4 shuttle flights a year over the next 5 years,our savings by using the Russians would be 20 flights x $225 million is $4.5 billion. That should be enough to build a new rocket. And if not, imagine how our astronaut passengers on the Russian shuttle can spy on them and find out once and for all why they can do it cheaper than we can.