If you use common sense you can avoid nearly all boating accidents and avoid being nominated for a Boater Darwin Award. 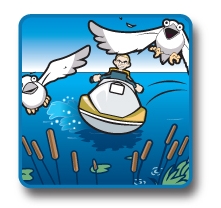 If you use common sense and operate responsibly, you can avoid nearly all boating accidents and avoid being nominated for a Boater Darwin Award.

Operate your boat at a safe speed at all times, especially in crowded areas.

Be courteous of others using the waterways and obey all boating rules.

Be watchful of swimmers, jet-skis, sea turtles, dolphins, other boaters and other obstacles.

Always have a spotter for water-skiers.

Stay alert, be respectful of buoys, and think before you act.

And the Darwin Award Goes to…
This tale from the Darwin Awards archives takes place in Logmozero, a village in northwestern Russia. A local man was questioned by the authorities when his neighbors revealed that he was using a World War II aviation bomb as an anchor for his boat.

The bomb was in working order, and could have been detonated at any time. The man was lucky to never have accidentally set it off.

The Bottom Line: If you don’t have common sense, don’t go out on a boat. Oh… and never use a bomb as an anchor!