Sammy Sosa, Mark McGwire and the Economy all on Steroids 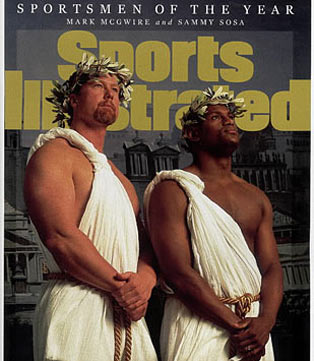 Our webmaster Thom just came back from the Dominican Republic after spending a month over the Holidays with his wife and her family there. Last Tuesday afternoon, a week ago, when he was taken a nap, he was rudely awakened by his bed shaking and his wife and daughter loudly bantering inside the door post. “Earthquake”, they said. As the crows fly they were only a 100 plus miles or so from the Haitian quake epicenter. Of course that has been the major part of our discussions since I picked him and his wife up in Orlando last Wednesday. Last night however during a conversation I overheard his wife make a mention of Sammy Sosa and the Dominican obsession with their son of the soil. I thought, hmmm, Sosa, that’s about a decade or more ago; what’s so interesting about him that people in the Dominican Republic are getting all excited about.

And then I realized that Mark McGwire who battled with Sosa for batting hegemony in that historic 1998 season was in the news because he finally admitted to having taken steroids throughout his baseball career. “I knew this day would come” McGire admitted.

Hearing Sosa’s name again was maybe about truth and justice for a Dominican native son, although it also turns out that many over there question his recent move to look more caucasian by apparently doing some chloroxed skin peels. What ever it may be now that McGwire has finally, after several denials, admitted to using steroids, does he still have the right to write history and claim the title? In a perfect world I would be inclined to say NO, but our world is not perfect. Our world has lots of shortcomings and mankind suffers from selective memory loss or even “amnesia” when it comes to writing history.

We use the expression “all things equal” as if equality is truly a birthright. It isn’t and we may as well wrap our mind around that reality. It is a “Purist’s” dilemma. Here is one example to chew on if we always want to be fair and just; In 1961 Roger Maris took over Babe Ruth single season home run record. Since the qualification for that title read “Most Home Runs in a Single Season”, it was of no importance that Maris had a season that offered 8 more games to score in than Babe Ruth had.

All things being equal is not an expression history puts a lot of value on; neither is comparing apples to apples, because really: one apple differs from the next one as much as it differs from an orange. “Were McGwire’s homeruns real or fake because they were steroid induced?”
Some people don’t care and some will say, “They are real alright because it doesn’t matter where the help came from.” As if the means are always justified, as long as you win.

And that is pretty much the same story for today’s economic resurgence. The recovery we’re experiencing is government induced, but that doesn’t mean that you don’t have a real job if it is paid for by stimulus money or bail outs. If the government bails out an industry with cash and incentives, the profits are still real.

Immoral, wasteful or inefficient and partial, the current government spending, tax incentives and low interest rates will still generate real growth, no matter if some of us consider it unfair and unjustified to pile huge debts upon our children and grand children. For a while we will see company earnings and frankly earnings are the only concern in the markets.

And that’s what real life is until the next best thing comes along. The McGwire/Sosa dispute is academical since in 2001 Barry Bonds took over the title with 73 hits in one season; that is until he also got an asterisks next to his name that branded him a “crook” of some sorts.

If our master economist Ben Bernanke gets a helping hand from innovation and technology to help the economy accelerate to a point where it can stay ahead of hyper inflation without drowning in debt, he may just get an asterisks next to his name as well, but history will still write him up as the one who saved America.
It’s called gambling.

And that’s about all we do these days. We gamble on not being caught and we gamble on our children’s future and hope that history will look kind upon us. As for Sammy Sosa; he had a monster career in baseball and questions about doping did not come until after he retired from his top years. He gambled and made lots of money doing so. Whether he can live with what he knows to be the truth, is his personal battle.

In the meantime, if you feel like gambling a bit in the markets, I’d say go ahead, the chances you’re going to make some money are favorable. Just be on the look-out for the turning point.